#961: Hello ... Hello ... my old friends ... It's great to see you once again! The opportunity to go see ELO Again perform the works of Jeff Lynne (and a certain Chuck Berry*) within the Electric Light Orchestra (ELO) at the magnificent surroundings of Chepstow Castle was simply too good to miss yesterday evening (Saturday 29th August) - even though it meant a 200 mile round trip from ELOBF HQ in Wolverhampton, literally at the last minute! 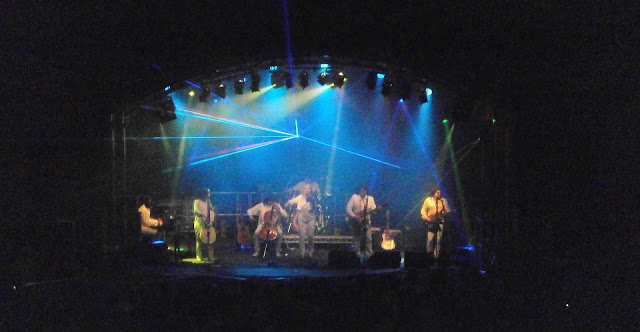 The combination of a great ELO tribute band performing in an eleventh century medieval castle in front of a hefty and appreciative crowd on a pleasant Summer night meant that there was a special atmosphere for all those in attendance as the South Wales based band delivered another impressive set of twenty five (25) ELO songs covering the period 1971-1983, including two (UK) album tracks. ELO Again particularly excelled when it came to the ELO classic rockers "Ma Ma Ma Belle", "Showdown", "Do Ya" and "Rockaria!" with their set perfectly balanced by choir backed, beautiful renditions of "Can't Get It Out Of My Head" (surely the best place to experience this "Eldorado" epic) and "Mr. Blue Sky". This was a well organised, wonderful concert in a sublime setting. It was a pleasure to attend and a credit to a band riding on the crest of an ELO wave of popularity.
Set list: "Standin' In The Rain" ~ "10538 Overture" ~ "Evil Woman" ~ "Big Wheels" ~ "Livin' Thing" ~ "Hold On Tight" ~ "Wild West Hero" ~ "Ma Ma Ma Belle" ~ "Showdown" ~ "Sweet Talkin' Woman" ~ "All Over The World" ~ "The Diary Of Horace Wimp" ~ "Twilight" ~ "Do Ya" ~ "Can't Get It Out Of My Head" ~ "Confusion" ~ "Shine A Little Love" ~ Gaelle's violin solo ~ "Last Train To London" ~ "Telephone Line" ~ "Rock 'n' Roll Is King" ~ "Turn To Stone" ~ "Rockaria" ~ "Mr. Blue Sky" ~ "Don't Bring Me Down" ~ *"Roll Over Beethoven"