#926: Hello ... Hello ... my old friends ... It's great to see you once again! If I'm honest, I originally had no intention of writing a gig review for the concert given last night [Saturday 13th June] by Elton John at The Banks's Stadium in Bescot, Walsall. The links between EJ and ELO are, to say the least, tenuous with Elton, Jeff Lynne and Roy Wood with their joint contributions to the OST for "All This And World War II" back in 1976. Yours Truly KJS was therefore pleasantly surprised to find that Matt Bissonette was also to be found on stage as bassist and backing vocalist in the Elton John Band. You may recall that Matt was a member of the proposed touring band for Jeff Lynne's ELO back in 2001 and was featured in the best-selling "Zoom Tour Live" DVD alongside his percussionist brother Greg Bissonette. The brothers were also a part of Ringo Starr's touring band between 2003 and 2005. 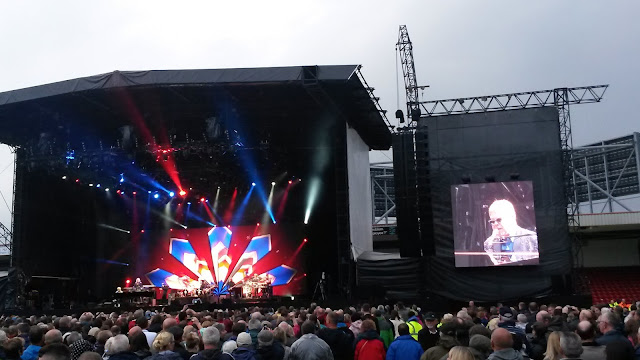 But what of the the gig itself? This was both an impressively organized event [with an attendance of over 14,000 folks] and a hugely enjoyable performance by a relaxed and appreciative modern musical icon as he delivered a balanced set that not only included a generous selection of his many hits but also gave those in attendance the opportunity to hear some of those album tracks - significantly from "Goodbye Yellow Brick Road" - which have built the foundation of his near fifty year career. 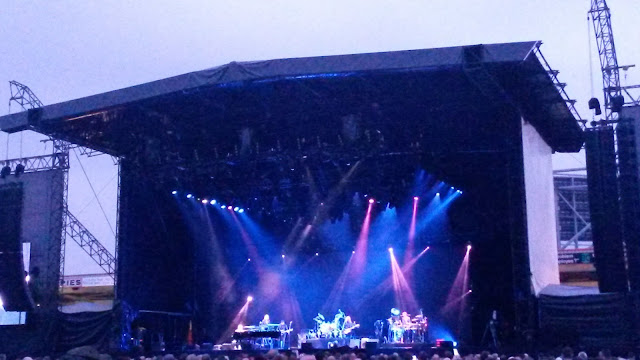 For me, it was a marvellous spectacle to see such a amazing pianist and songwriter deliver remarkably strong vocals as he trawled his bejeweled songbook [not forgetting, of course, the lyrical contribution of Bernie Taupin]. You'd expect to be tapping [and even shuffling] your feet to the likes of "Crocodile Rock" and "I'm Still Standing" but it was the slower numbers "Candle In The Wind", "Tiny Dancer", "Daniel", "Your Song" and "Rocket Man" that caught my attention. My personal fave had to be "Sorry Seems To Be The Hardest Word", a song I've always loved but never seen or heard in the flesh. A thoroughly enjoyable evening indeed after the heights of Paul McCartney last month in Birmingham. Now for Fleetwood Mac in early July ...
Set list: "Funeral For A Friend/Love Lies Bleeding" ~ "Bennie And The Jets" ~ "Candle In The Wind"~ "All the Girls Love Alice" ~ "Levon" ~ "Tiny Dancer" ~ "Believe" ~ "Daniel" ~ "Philadelphia Freedom" ~ "Goodbye Yellow Brick Road" ~ "Rocket Man" ~ "Hey Ahab" ~ "I Guess That's Why They Call It The Blues" ~ "Your Song" ~ "Burn Down The Mission" ~ "Sacrifice ~ "Sad Songs [Say So Much]" ~ "Sorry Seems To Be The Hardest Word"  "Don't Let The Sun Go Down On Me" ~ "The Bitch Is Back" ~ "I'm Still Standing" ~ "Your Sister Can't Twist [But She Can Rock 'n' Roll]" ~ "Saturday Night's Alright For Fighting" ~ "Crocodile Rock" 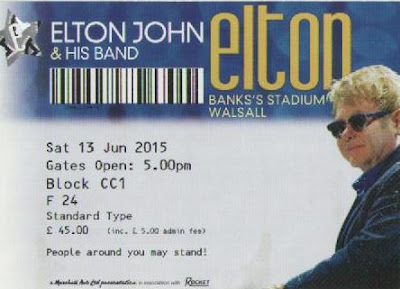