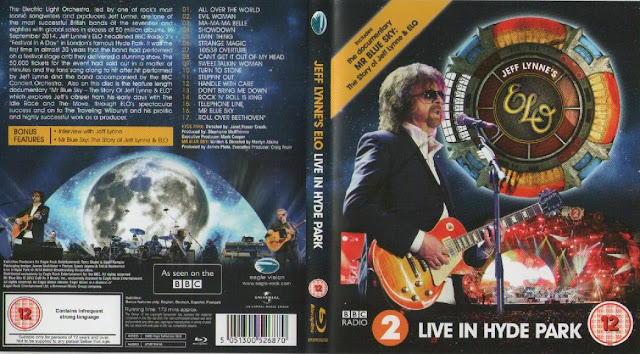 #933: Hello ... Hello ... my old friends ... It's great to see you once again! In a smart commercial move via an official press release just a few hours ago today [Monday 29th June], Jeff Lynne has announced that, almost a year to the day, the critically acclaimed live performance by Jeff Lynne's ELO at Hyde Park in September 2014 will see an official release on Friday 11th September by Eagle Rock Entertainment [in association with the BBC], in DVD, Blu-ray and digital formats.

Catalogue numbers #EREDV1185, #ERBRD5268 and #EVD1169 have been allocated. The much anticipated release will also include the long overdue formal issue of "Mr. Blue Sky: The Story Of Jeff Lynne & ELO" making this truly a "must buy" for fans of Jeff and his ELO vehicle frustrated previously by the limited download only release of the 2012 documentary and various Hyde Park bootlegs. Once again, Eagle Rock have confirmed their premier position when it comes to releasing ELO studio and live video footage. This will likely be ELO's second #1 this year in the Official UK DVD Chart following the success of the Live At Wembley DVD in March. The announcement goes on to state:

"This release offers fantastic value with full length concert and feature length documentary on the same disc. The show from Hyde Park includes "Mr Blue Sky," "Sweet Talkin' Woman," "Livin' Thing," "Evil Woman," "Telephone Line," "Don't Bring Me Down," "Showdown," "Roll Over Beethoven," "10358 Overture," "Can't Get It Out Of My Head," "Strange Magic" and many more!

The Electric Light Orchestra, led by one of rock's most iconic songwriters and producers, Jeff Lynne, are one of the most successful bands of all time with global sales of over 50 million albums. In September 2014, Jeff Lynne's ELO headlined BBC Radio 2's "Festival In A Day" in London's famous Hyde Park. It was the first time in almost 30 years that the band had performed on a festival stage. Jeff Lynne said, "It seemed like the entire 50,000 were singing and clapping along, which carried on for the whole night. The Hyde Park concert turned out to be one of the most memorable shows ever for me."

The critics agreed, with The Times of London saying it was 'near perfect' in their 5-star review and the Evening Standard marvelling that 'ELO still have the power to flick switches' in their 4-star review. Neil McCormick of the Telegraph noted how "fifty thousand grown men and women sang along in joyous rapture to some of the greatest pop music ever heard."

As well as the full "Live At Hyde Park" show, the Bonus Features offer the feature length documentary "Mr Blue Sky - The Story Of Jeff Lynne and ELO" and also new interviews filmed at Hyde Park. Jeff Lynne has been involved every step of the way with every aspect of this production, especially the audio delivery, saying: "It's important to me that viewers experience the Hyde Park show exactly as it was performed on the night...in stereo.

This show was a truly special moment that will live on in fans' memories forever - the 50,000 tickets for the event had sold out in a matter of minutes and the fans sang along to hit after hit performed by Jeff Lynne and the band accompanied by the BBC Concert Orchestra. "Live At Hyde Park" by Jeff Lynne's ELO will be cherished by all who love this truly important band."