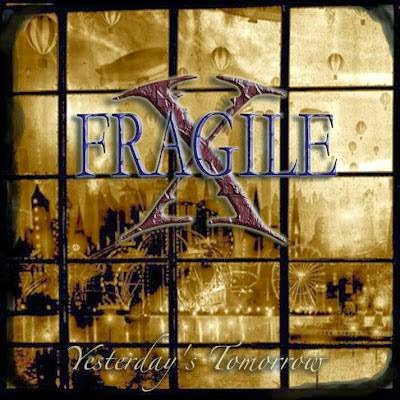 #912: Hello ... Hello ... my old friends ... It's great to see you once again! It's been a lengthy thirty months since Yours Truly KJS reviewed Fragile X's impressive 2012 album "Return To Paradise" for ELO Beatles Forever [ELOBF] and, if nothing else, the wait has whetted my appetite in anticipation to what this Colorado based combo would deliver next for their third studio album after such a long hiatus and the odd change in personnel. Hence, I was pleased to see an advance copy of their new recording land on my doormat the other day. And "Yesterday's Tomorrow" was well worth the wait with over sixty five minutes of thoughtful, melodic rock - with a dash of violin and a touch of sax in certain places - that takes the listener on an enjoyable sonic journey.

More Rush than ELO, nevertheless this an album of progressive progression for Fragile X as they combine their new material with a trio of reworked versions. "Colorado Way Of Feeling", "Social Butterfly" and "Going Back Home" are joined by nine new tracks including the rousing riff laden opener "Inspiration", an instant attention grabber, followed by the varying tempo of "Denial" and the raw power of "Ten Feet Tall". The superb combination of guitar, precise percussion and vocal harmonies of "Open Mind" are a joy. The soulful longing and regret of "Belonging" hit the spot as does title track "Yesterday's Tomorrow" which, the more you listen to it, takes on an anthemic persona which would grace any live stage with "Under The Radar" another magnificent triumph.

Closing track "Epic Of Caldarone" rivals the song durations of ELO's second studio album and the best words that I can find to describe it is to say that it's a prog rock response to "The Battle Of Marston Moor [July 2nd 1644]", replete with battle sounds but maybe slightly more accessible to the casual listener! This is a polished and well produced album with some sublime guitar work and drum work evidenced by the three [3] successful reinterpretations on show, as mentioned previously. Whilst added saxophone and strings mean that "Going Back Home" now has an ELOesque feel to it and the re-recorded "Colorado Way Of Feeling" has a fresh, warm glow to it, but for me, the jewel in the crown of "Yesterday's Tomorrow" has to be "Social Butterfly" - a song with production values that deserves airplay and full FM radio coverage, it cries out to be a promo single not only for the album but also to nudge the door open of ambitious record companies. It's that good. This album will grow on you as it did on me. [9/10]

"Yesterday's Tomorrow" by Fragile X is now available to order in download format [with a CD release to follow shortly] from CD Baby via this link thus:

You can find out what Fragile X are up at their brand new official web site and/or their Facebook page via these links thus: