#905: Hello ... Hello ... my old friends ... It's great to see you once again! Whilst there are not a few Roy Orbison, ELO, Tom Petty, George Harrison and Bob Dylan tribute acts in existence bringing the live sound of those musical legends to a venue or theatre near you, there are even fewer who attempt to reproduce the inspired finery of The Traveling Wilburys in front of an audience.

Over the years, ELO Beatles Forever [ELOBF] have featured a few of those talented musicians who have successfully covered the hits of of our heroes in a live setting so it was a really easy decision to make a return trip to the homely Artrix Theatre in Bromsgrove on Friday 9th May to check out a 'new' Wilburys tribute band ply their trade in front of a sold out house.
And The Roy Orbison & The Traveling Wilburys Tribute Show did not disappoint as they  delivered a set of of nearly thirty songs not only dominated by the music of The Traveling Wilburys but also a fair portion of Roy Orbison's marvellous "Mystery Girl" album and some great versions of songs by The Beatles, Jeff Lynne [some, of course also produced by the ELO maestro], TP's Heartbreakers and the enigmatic if not poetic Bob Dylan.

You really needed to be there to experience the magic of The Wilburys' music live but if I were to choose a fave for each of the icons represented within this enjoyable show, they would be [after much deliberation] "A Love So Beautiful" [Paul as Roy]; "Running Down A Dream" [Owen as Tom]; "Got My Mind Set On You" [Richard as George]; "Knockin' On Heavens Door" [Aubrey as Bob] "Mr. Blue Sky" [Richard as Jeff] and "Tweeter And The Monkey Man" [Wilburys].
Highlights were a plenty during the show with each every member of the band being accurate and entertaining in their respective roles. The beauty of this show is that you get six [6] tributes for the price of one with plenty of attention given to the output of the ultimate supergroup and the career highlights of each member with the added ingredient of Jim Keltner too!  It was a thrill - and quite moving at times - to see and hear songs previously consigned to vinyl and CD played out in the here and now. This unique and pleasing show ticked all the boxes for Yours Truly KJS. The tour continues with dates in Southampton, Chesham, Tewkesbury, Coventry and Peebles to come. Go see 'em! 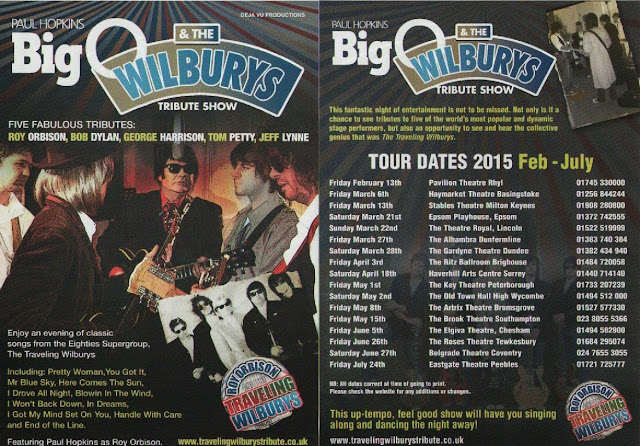 Find out what The Roy Orbison & The Traveling Wilburys Tribute Show are currently up to and where they are performing next via their official web site thus: