#871: Hello ... Hello ... my old friends ... It's great to see you once again! The love of Pugwash engenders many things. And one of those is endearing friendships ... even with folks that you haven't [yet] met. One of those wonderful folks is David Tolar, a huge fan, of course, of ELO and now a confirmed member of a growing band of Pugwashian disciples. David has had the good fortune to be able to go see the mighty Pugwash on their second tour of the US eastern seaboard in the last week or so. Not once, not twice but three times. I thought that it would be a good idea to ask David to carry out the first ever stateside gig review for ELO Beatles Forever [ELOBF]. So, without further ado, here are David's recollections and thoughts regarding those two [2] Pugwash concerts he attended at Toad in Cambridge, Massachusetts [MA] sandwiched by their gig at The Iron Horse, Northampton, MA earlier this week thus:
Saturday 7th March: At The Toad

Despite a situation where the boys couldn't hear themselves [due to a lack of stage monitors or wedges], they pulled off a show so eclectic and so insanely good that it left my wife saying, "So why didn't you hear about them YEARS AGO?" ... again! A bit of background on the venue itself: Toad is a venue that holds no more than 60 people comfortably, and anything over and above that is stifling. And folks, the place was PACKED. Stuffed to the proverbial gills with fans that in some cases had travelled great distances just to see the band. In fact, the venue eventually had to stop letting people in due to the demand. Pugwash took the 'stage' just after 11:00PM. I'm using the word 'stage' lightly because in all truth, the venue wasn't really designed with a four piece band in mind, and between the drums and amps, there wasn't enough room for all of the band to actually BE onstage - bassist Shaun McGee had to spend the evening on the floor as a result.

The other 'hindrance' to the staging? The bathrooms are located right behind a swinging door, and to actually get to the door, you have to walk past the band. A constant parade of people walking back and forth was the result, not to mention the bar staff who also had to weave their way around the scene. The words 'controlled chaos' came to mind!

At this point, you're probably asking "But how was the show?" If you're familiar with the Omnivore Recordings anthology, Pugwash hit virtually every touchstone on that collection, plus they previewed a track from their forthcoming album, arriving in stores in August. "Take Me Away", "Keep Movin' On", "Answers On A Postcard", "There You Are", "Apples", "Here", "Finer Things In Life", "Anyone Who Asks", "Fall Down", "Be My Friend A While" and set closer "It's Nice To Be Nice" were all from the anthology. They did a lovely version of "Dear Belinda" which was "... dedicated to anyone named Belinda here!" and as for the band's covers on the night, there were some inspired moments including snippets of "Whole Lotta Love", "A Well Respected Man", "Paint It Black" and "Sunshine Of Your Love". The big highlight was a simply stunning off-the-cuff version of Roy Orbison's "Crying", featuring guitarist Tosh Flood's soaring falsetto at the end which even caught Thomas Walsh a bit by surprise.

I can't remember EVERY little snippet that they did, of course as being at a Pugwash show is like being inside of a jukebox that is prone to jump around from genre to genre and style to style in ways that are unimaginable unless you've actually EXPERIENCED this for yourselves! It's a remarkably unique performance by four incredibly talented musicians who just happen to be four of the nicest people you could ever hope to meet and know in the 'music industry'. So yeah ... It's 4:00AM and I'm still awake. And best of all ... I'm doing this again Monday and Tuesday night!

Monday 9th March: Rocking The Iron Horse
It's now a Tuesday morning, just after midnight here at Chez Nous. I'm "Giddy" ... and amazed ... and humbled ... and grateful ... and gobsmacked ...and I could go on and on for hours! I still can't describe what I feel at the moment. Two nights. One with a Toad, the other with an Iron Horse. Two completely different venues. A tiny pub/bar/local watering hole, and one of the truly great concert venues in both Western Massachusetts and the entirety of the Pioneer Valley. Two nights where the crowds exceeded expectations. Two nights of amazing people, and even more astounding music. And now, something that might possibly be the biggest "DUH!" moment I have EVER written in ANY review I've ever done:

The performance tonight had a similar set of songs played as the show at Toad, with a dazzling set of cover tunes [and some truly inspired false starts]. The primary emphasis again was on the Omnivore anthology released last fall, with additional tracks such as "Dear Belinda", "This Could Be Good" [a track they did at Toad that I forgot to mention the other night], and set closer "Two Wrongs" [not done at Toad], plus not one, but TWO songs from the forthcoming album arriving in August ["Hung Myself Out To Dry" and an amazing version of "The Fool I Had Become", which they had not aired previously on the tour to date] and a song that made me say "If THIS is what the album is going to sound like, then this is DEFINITELY going to be my "Album of the Year". The remaining anthology tracks were identical to the Toad show.

One of the more humorous moments was when Thomas started "Hey Jude", but then re-enacted a skipping record, jumping from artist to artist [including an inspired few seconds of "Sweet Caroline" - of all things!]. The sound mix was incredible, and more than one audience member said "It's a shame this wasn't shot on video or recorded for a live album - this is INCREDIBLE!". And it was. This show truly was one for the ages. Perfect. Sublime. Ridiculously amazing. Pugwash at their best.

A brief personal interjection: The first concert I ever attended was on 27 September 1978, at the old Boston Garden, as I witnessed the Electric Light Orchestra on "The Big Night" tour, with that spaceship of theirs. Since then, I've seen more than 2000 shows, and have personally played at least another 500 more. Tonight was in my all-time Top Ten shows. EVER. It. Was. Just. That. Good.

Tuesday 10th March: Return to The Toad
The staging was the same as the first show. How Pugwash managed to squeeze that gear onto THAT stage still blows my mind - and once again, bassist Shaun McGee had the floor to stand on - these things ALWAYS happen to the bassist, don’t they?! This show felt more like a very loose jam or rehearsal than a more 'proper' gig, in sharp contrast to the Iron Horse show the preceding evening. Due to an earlier start time, there weren't as many songs aired, but that didn't mean the audience didn't have our share of laughs and a surprise or two along the way...so with all of that in mind, here's the set list from the second and final Toad performance:

Take Me Away; Keep Moving On; I Want To Break Free [a very brief Queen snippet]; Kings And Queens; Hung Myself Out To Dry; Gunga Din [a Byrds snippet]; Hickory Wind [a Gram Parsons song with vocals by Tosh, while Thomas Walsh tuned]; Don't You Write Her Off [a track by former Byrds members McGuinn, Clark and Hillman -and a song which Thomas frequently teases]; Eye Of The Tiger [a Survivor snippet]; Be My Friend A While; Apples; There You Are; Words [a Bee Gees snippet]; Dear Belinda; Here; Your Friend [the first airing of the track on this tour]; Are Friends Electric? [a Gary Numan/Tubeway Army snippet; Tainted Love [a simply amazing version of that chestnut]; Anyone Who Asks; Answer On A Postcard; Fall Down; It's Nice To Be Nice

That was it for my three nights with Pugwash. To Thomas Walsh, Tosh Flood, Shaun McGee and Joey Fitzgerald: my sincere thanks! Cheers! Dave Tolar, ELOBF's roving [if not raving] reporter! 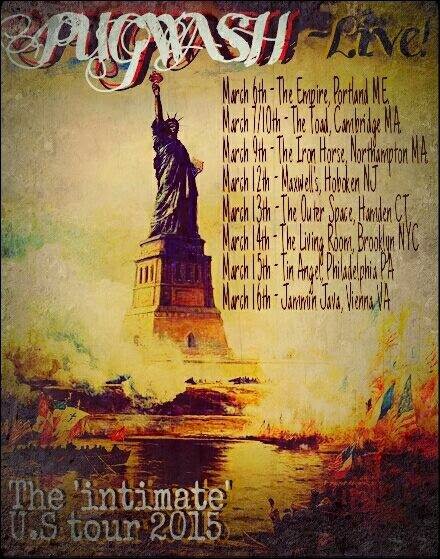 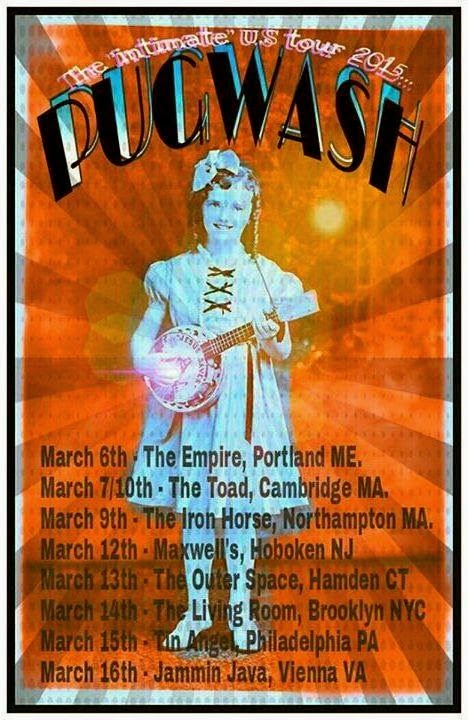 Yours Truly KJS thinks that you will agree with me that DT has done a stellar job in reviewing all three gigs for ELO Beatles Forever [ELOBF] and adding his amiable commentary. My thanx are extended to Dave and his wife Susan for their time, hard work and sheer enthusiasm. Over here in the UK, we can look forward to this quartet of Pugwash gigs in May thus:

Sunday 31st May
Pugwash @ The Joiners, Southampton
Tickets: £12.00 each [*plus booking fee]
joiners.vticket.co.uk/product.php/241/pugwash