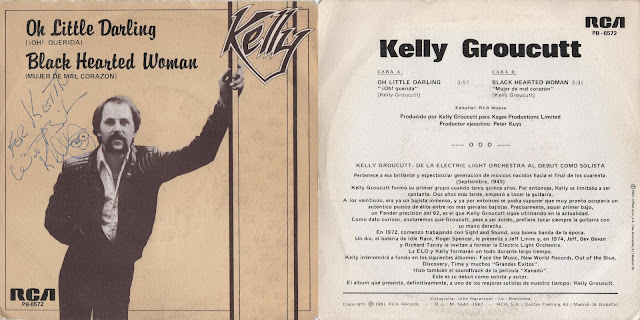 #861: Hello ... Hello ... my old friends ... It's great to see you once again! Yours Truly KJS has owned a copy of the Spanish issue of Kelly Groucutt's 1982 solo single "Oh! Little Darling" b/w "Black Hearted Woman" (RCA #PB-6572) for many years. On the rear of the 7" picture sleeve is a summary of his career and an introduction to his then solo album. I thought that it would be interesting to attempt to translate the text in English, being as you can clearly see mentions of Sight 'n' Sound, The Idle Race, Roger Spencer (and more familiar names) within it thus:

KELLY GROUCUTT: FROM THE ELECTRIC LIGHT ORCHESTRA TO SOLO DEBUT
"He belongs to that generation of great musicians born in the late forties (September 1945). Kelly Groucutt formed his first band when he was fifteen. By then, Kelly was limited to being a singer. Two years later, he began playing guitar. At twenty, he was already an accomplished bassist, and it could be assumed that he would soon occupy a position among the elite of the most brilliant bassists. Indeed, that first bass, a Fender Precision 62, Groucutt still uses today. Curiously, Groucutt wrote that although he was left-handed, he always preferred to play guitar with his right hand. In 1972, he began working with Sight 'n' Sound, a good band of the time. One day, the Idle Race drummer, Roger Spencer, introduced Kelly to Jeff Lynne and in 1974, Jeff, Bev Bevan and Richard Tandy invited him to join the Electric Light Orchestra. ELO and Kelly formed a long relationship. Kelly went on to be involved in the following albums: "Face The Music", "A New World Record", "Out Of The Blue", "Discovery", "Time" and many of their greatest hits. He also did the soundtrack of the movie "Xanadu". This is his debut as soloist and writer. This album presents definitely one of the best soloists of our time: Kelly Groucutt."

It's always worth revisiting your record collection. Who knows what you might rediscover? I hope that the above transliteration conveys the content and intent of the original biography. ELO Beatles Forever (ELOBF) often features Sight 'n' Sound, The Idle Race and, of course, the late great Kelly Groucutt.