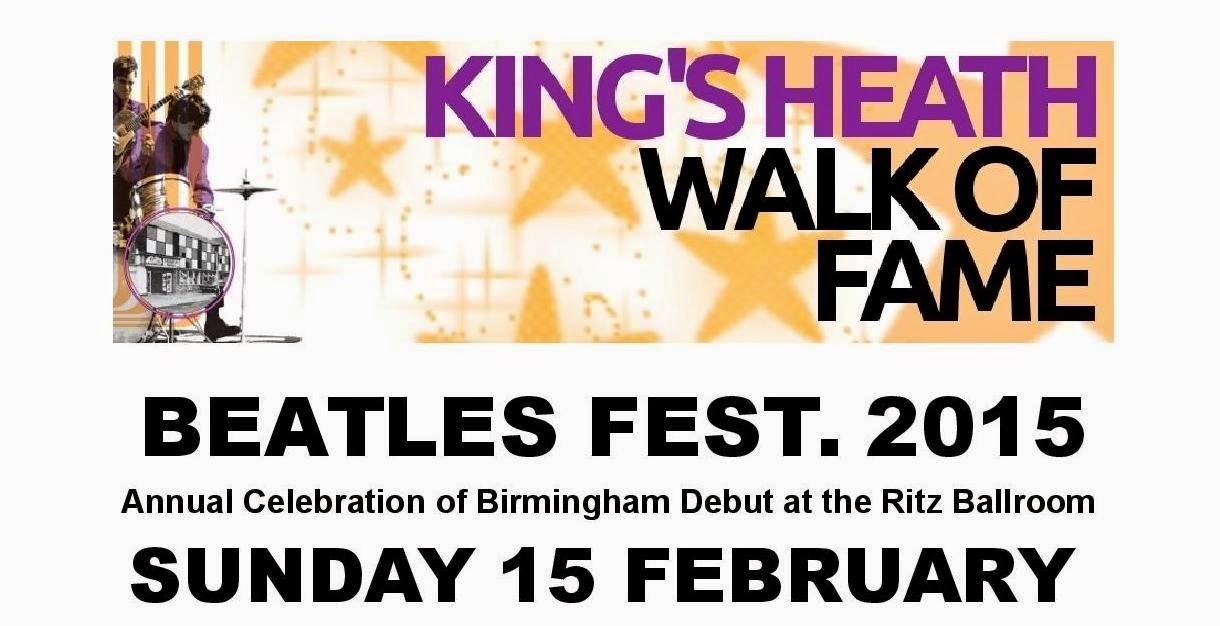 #841: Hello ... Hello ... my old friends ... It's great to see you once again! You are doubtless well aware that The Beatles were a major influence for both Jeff Lynne and Roy Wood and a major factor in the formation of The Electric Light Orchestra (ELO) whom John Lennon later candidly stated were "the son of Beatles". But did you also know that Sunday 15th February marks the 52nd anniversary of The Beatles' maiden (if not belated) performance in Birmingham, the birthplace of 'Brum Beat'?


Bob Prew and Ken Whittaker from King's Heath Walk Of Fame have kindly sent me the official press release for their special Valentines Weekend Treat during Beatles Fest 2015 featuring an afternoon acoustic session and an evening concert by The Born Again Beatles thus:

Lovers of Beatles music are being urged to bring their Valentines to King's Heath's for Beatles Fest 2015 on Sunday 15th February. Starting with their first hit single “Love Me Do”, The Beatles wrote many classic love songs including “I Want To Hold Your Hand”, “She Loves You”, “All My Loving” and “All You Need Is Love”. And all of these songs will be sung at the two concerts that make up Beatles Fest 2015 commemorating the Fab Four's Birmingham debut on 15th February 1963 at the old Ritz Ballroom on York Road which was sadly destroyed by fire two years ago.

Back in 1963, one Beatles fan's Valentine's wish really did come true when she was picking up her coat from the coat room after the concert and bumped into Paul McCartney. After giving her his autograph she followed him into the bar where he called her over to meet the rest of the band who gave her their autographs too. She then took up Paul's kind offer of a lift back into town in their van where she sat on his lap and shared a kiss! Yvonne's autographs of the four Beatles, signed at the Ritz Ballroom, were then auctioned at Christies on 24th June 2010.
From 3:00PM to 6:00PM top local musicians will play their favourite Beatles songs in an acoustic session at Fletcher's Bar on York Road directly opposite the former ballroom. Doors will then open at 7:00PM at the Hare & Hounds for a Special Concert by top Midlands tribute band The Born Again Beatles - who last year starred at Liverpool's Cavern Club where the Fab Four started out.

Bob Prew and Ken Whittaker, joint coordinators of the King's Heath Walk of Fame, said, “This year's Beatles Fest in King's Heath will be the biggest and best so far. We would urge fans to buy tickets for both events straightaway as last year's Anniversary event sold out very quickly with fans travelling from as far away as Lancashire, Yorkshire and Somerset”.

The Beatles appeared at the Ritz Ballroom - one of 4 venues run in the 1950′s and 60′s by the legendary Irish couple Ma and Pa Regan - on 15 February 1963 shortly after releasing their second single “Please Please Me”. Originally scheduled to appear on 11 January 1963, they had been prevented by blizzard like conditions from making the 11 mile journey to King’s Heath from one of the Regan's other venues - the Plaza in Old Hill. When they did eventually make it on 15th February, Beatlemania had really started to take off and the Beatles were only able to enter the Ritz by climbing up a ladder from Milford Place at the rear of the ballroom. In fact, the Fab Four almost had to appear as the Fab Three after George Harrison arrived late by taxi and was trapped by screaming fans.

“Tell them to turn that racket down” is what Pa Regan is rumoured to have shouted while they were practising! But he was a very happy man really. He had persuaded their manager Brian Epstein to agree to them performing for their previously agreed fee even though they were now No. 1 in the charts! They performed the rescheduled gig at The Ritz during a break from The Helen Shapiro Tour on which they started off as only 4th out of the eleven acts on the bill!

The Ritz Ballroom: The first ever Birmingham Civic Society Musical Heritage plate was unveiled by the Lord Mayor on 27th June 2012 to commemorate the really significant part played by the Ritz Ballroom in Birmingham's Musical Heritage. Most of the major artists of the 1960's played there at the start of their careers including The Rolling Stones, Robert Plant, The Kinks, Pink Floyd, Jimmy Cliff and The Move. The Ballroom closed down at the beginning of the 1970's when the Regan's converted it into a Bingo Hall. After Pa Regan died in 2004 and Ma Regan died in 2008, the building was vacant until it became a Cash Converters shop. On 28th March 2013 a fire destroyed the building. Local residents and businesses are currently trying to persuade the owner to sell them the site in order to create a new Ritz Arts Centre with a Pop History Museum and performance space for the next generation!