#831: Hello ... Hello ... my old friends ... It's great to see you once again! The wonderful enhancement to the ELO sound to be found on their 1975 album "Face The Music" - including, of course, "Evil Woman" and "Down Home Town" - as well as during the ensuing American tour thereafter were thanks to, in no small part, to the talent and the sublime female backing vocals of SuMagNa. Marge Raymond was an integral of the legendary SuMagNa and kindly took part in this interview recently with Yours Truly KJS for ELO Beatles Forever (ELOBF) talking not only about her time with ELO but also her early and latter career. Enjoy!

KJS: What and who were your inspirations to become a singer and songwriter?
Marge: According to my mother, I was singing from the day that I was born! In reality, I've been singing all my life and it was not any one person that inspired me to sing. It's inherently part of my personality to sing since the day I could speak. My parents, seeing that I had been gifted with the ability to sing and their being obsessed with listening to music, bought me a phonograph and a small child's piano. I listened to all the Rogers and Hammerstein albums (Carousel, Oklahoma, The King & I etc.) and other various classical musicals along with popular music of the time.
I was inspired by everything musical. At about the age of 5, on my little piano, I can remember composing music, but it was all in my head. I had a 78RPM record of The Platters song "My Prayer", released in 1956. I taught myself how to vocally belt by singing the ending of "My Prayer", over and over till I was able to perfectly duplicate it. I was 8 yrs. old. Any opportunity I could get to entertain people I took! I can remember singing "Climb Every Mountain" at school assembly on the stage leading the entire auditorium. Personally, I thought that everyone could sing. It was hard for me to comprehend that everyone didn’t sing music like I did. It was during that time, while I was in 3rd grade, that a report card came home stating to my parents that I was musically gifted. That is when I was told I had something that my friends and the majority of the population didn’t have.
KJS: Please tell us about your early career?
Marge: I was discovered singing on a street corner in Brooklyn, New York. Back in the 60’s there were several acapella singing groups in the neighbourhood. One in particular used to sing on my street corner. They sang at night and I would listen from my window. One day I got the nerve to go up to them and say I know all your songs and can sing them. There were never any girls singing. The guys said "OK lets hear you!", most likely thinking I would make a fool of myself. I would sing the top note (first tenor). They were impressed and so there I was singing with them. Because I was a girl, they didn’t really let me sing lead vocals. I had a couple songs they let me sing lead. One was, “My Vow To You” by The Students. We would draw big crowds, listening to us. One day a man stopped in his car, listened, approached us and said, I want to bring you up to the Brill Building. You sound great. We go to the Brill Building (this is around 1964) to Coed Records. As we were doing a live audition, the President of the company says, "I want to hear the girl!" (I was singing background vocals, not lead). He asked me if I could sing "Baby Love" by The Supremes. 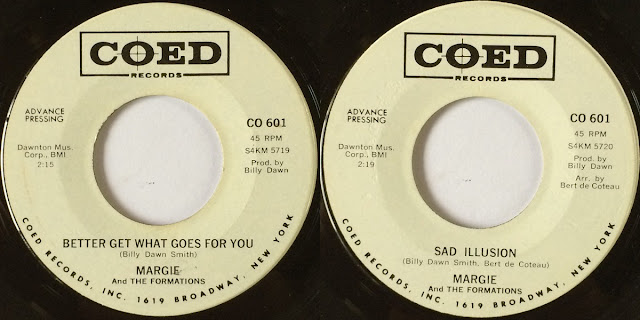 KJS: Can folks purchase your releases and, if so, how?
Marge: Unfortunately, the Flame albums are out of print. I'm sure you can find them on eBay.
KJS: What is Marge Raymond doing next and how can folks keep tabs on your good self these days and beyond?
Marge: I am always singing somewhere or recording. I am also a tour guide for the Historic Green-Wood Cemetery. I sing a tribute to Leonard Bernstein by his memorial. I burst into song at various times. You can check out my Facebook page at www.facebook.com/margeraymond and my website at www.margeraymond.com. I want to write a book about my long career.
KJS: Finally, here is the question that I always ask next when interviewing for ELO Beatles Forever. What are your personal favourite ELO, Jeff Lynne and/or Beatles tracks, and why?
Marge: Ah, I have no favourite, I love them all! The group I sing with, Generation Gap, have over 100 Beatles songs that we sing.
I do like singing "Oh! Darling" by The Beatles because I get to put my rock 'n' roll style on it. When I was singing in the chorus for Paul McCartney’s Liverpool Oratorio, I approached him and told him how much I love his work. I went on to tell him that I sing "Oh! Darling" with one of my bands. He said, "Do Ya? How do you sing it?" I told him I sing it a bit more rock 'n' roll. Right there and then he asked me to sing it for him! I was mortified, but sang the first verse and chorus for him in the lobby of Town Hall where we were rehearsing. He loved it. I don’t think he ever heard a woman sing it before. Especially as I was singing classical music at the time as a first tenor and before breaking out into my rock 'n' roll voice! He gave me his autograph. Now that is a day I will never forget!

KJS/ELOBF wish to thank Marge for both her time and participation in this interview.
ELO Beatles Forever (ELOBF) recommends Marge Raymond to those enlightened folks who enjoy the music of ELO/Jeff Lynne, The Move, Roy Wood, 'Brum Beat', The Beatles and related artistes.