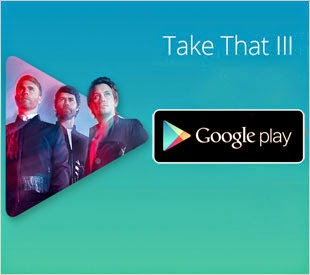 #807: Hello ... Hello ... my old friends ... It's great to see you once again! Back in October, KJS/ELOBF published an article entitled Jeff Lynne to Shine on New Take That Album? quoting several media outlets which suggested that Jeff Lynne had been recruited to produce the new Take That album "III" (released on Monday 1st December) in the wake of the departure of Jason Orange. There had been very little revealed about Jeff's involvement until up and until about a week prior to the release of the bands seventh studio album.

It turns out that the new album has effectively been issued in a Standard Edition (12 songs, CD/digital) and a Deluxe Edition (15 songs, CD/digital) plus a Google Play deluxe edition (18 songs, download) with the Jeff Lynne produced track "Fall Down At Your Feet" (2:55) to be found on the Google Play release alone. It's a nice song with Jeff on drums and his distinctive sound throughout, almost a Jeff song with Gary guesting on vocals. It's also track that should really have been included as standard and is a real candidate for a single ... especially when you consider that it is trending behind lead single "These Days" as the second most played and/or downloaded album track on Google Play. Indeed, there are only really a handful of songs - "Amazing" being an example - on the album that, in my opinion, might warrant the attention of the acclaimed producer. This appears to be a cute if not deceptive marketing ploy by Polydor Records, the bands label, playing on the mutual respect between Gary Barlow and a resurgent Jeff Lynne.

ELO Beatles Forever (ELOBF) believes that many ELO/Jeff Lynne fans pre-ordered "III" hoping to find at least one song produced by the ELO maestro in either the standard or deluxe CD/download editions. Yours Truly KJS, for one, is not impressed, even though I quite like "Fall Down At Your Feet". And I suspect that I'm not alone. Let's hope that those other Take That songs - believed to be also produced by Jeff - will find their way into an expanded edition of "III" soon.