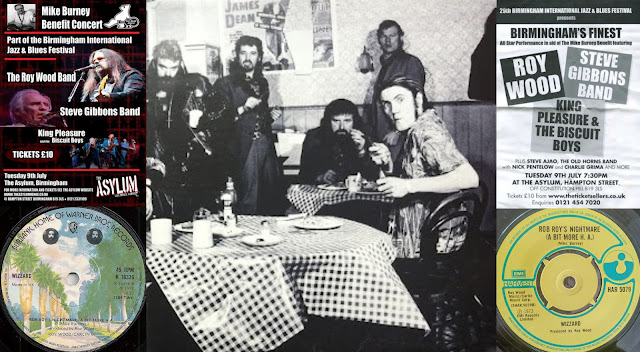 #815: Hello ... Hello ... my old friends ... It's great to see you once again! The funeral for the late Mike Burney will be held on Thursday 18th December at Sandwell Valley Crematorium, Newton Road, West Bromwich from 2:30PM until 4PM. Mike's wife Sue also said recently on Facebook that the former Wizzard saxophonist will be led down the path to the crematorium by a New Orleans marching band. During the service, Mike's body will be placed, rather fittingly, on a plinth whilst his song "Rob Roy's Nightmare (A Bit More H.A.)" - which was of course, the 'B' side to that perennial festive favourite "I Wish It Could Be Christmas Everyday" - is played.
This will be followed by a speaker, some music and a reading by Sue before an instrumental piece by Donaldson called "The Long Goodbye" closes out the ceremony. The wake will take place thereafter at The Wheatsheaf pub in Walsall.
Yours Truly KJS/ELOBF wish to extend our condolences to Sue and the family at this time.