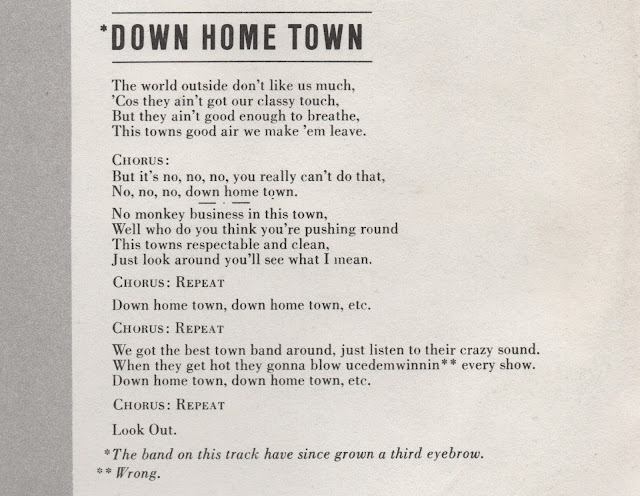 #777: Hello ... Hello ... my old friends ... It's great to see you once again! "Face The Music", ELO's 1975 classic LP, sports some interesting yet cryptic "secret messages" on its liner sleeve notes which have bemused and confused fans for nearly forty years. Within the lyrics of "Down Home Town" the word "ucedemwinnin" (an alliteration, of course, of "you see them winning") bears a double asterisk referring to two explanatory notes stating:
* The band on this track have since grown a third eyebrow.
** Wrong.
There are many theories as to what those statements mean ranging from a private Jeff Lynne joke to a it being a reference to traditional Brummie speak or an acknowledgement of the significant vocal contributions of SuMagNa (alias Susan Collins, Marge Raymond, Nancy O'Neil plus Ellie Greenwich). It could neither, either or both! ELOBF has its own theory that it signifies a changing of the guard as ELO transitioned to its classic seven [7] member  line-up after the departures of Mike de Albuquerque and Mike Edwards following 1974's "Eldorado" and the arrival of Kelly Groucutt and Melvyn Gale for "Face The Music". But, then again, I could be "** wrong"!
What are your theories or do you know the true story behind this great FTMystery?
Until next "Time" in the ELO (and related) Universe ... KJS ... 15-Oct-2014
Posted by Keith J Sinclair at 20:32