#750: Hello ... Hello ... my old friends ... It's great to see you once again! It was only natural that following his eye catching performance at the 2014 Brewood Music Festival and ELOBF's somewhat glowing recent review of his debut album "Sands Of Time" that Yours Truly KJS would venture out to local venue The Robin 2 last Wednesday [27th August] to see ace local finger style guitarist Pete Kent headlining his own gig.

First up on the night was provided by Megan Reece with a little help from her friends Chris Nicholls [guitar]; Rian Harris [backing vocals] and Jen Lali [also backing vocals]. And, with an impressive roster of her own compositions and some nice covers, Megan more than entertained those assembled with her own articulate versions of "Finally" [Ce Ce Peniston], "Jealous Heart" [Les Paul & Mary Ford] and "I'd Rather Go Blind" [Etta James] as well as her very own "Dreams", "I Don't Think So", "We're Here Again" and the rather classy "Unheard".

And what of Pete Kent? The Wolverhampton based guitarist delivered a varied and, indeed, stunning set of his unique interpretations of songs by such wide ranging artistes as The Beatles, Rufus & Chaka Khan, Stevie Wonder, Michael Jackson, The Who, The Kinks, Blue Oyster Cult and Level 42. Add to that his own material from "Sands Of Time" including the title track and "Postman's Knock", a TV theme medley and an astonishing duet with fifteen [15] year old Tom Rushton entitled "Tamacun" [Rodrigo y Gabriela] and you can well imagine an amazing night of guitar craft. I counted at least twenty [25] different songs played by Pete during the evening with my personal faves being his wonderful cover of "The Way It Is" [Bruce Hornsby & The Range], "Don't Fear The Reaper", "Eleanor Rigby" and [naturally] "Something About You" [recently endorsed by none other than Mark King]. All in all, an intimate and highly enjoyable gig!
I've now challenged Pete to attempt an interpretation of "Mr. Blue Sky" to go with his famed version of "Don't Bring Me Down" at some point in the future too! You can find out more about what Pete Kent is up to via his official web site thus:

Review: From Now On (Azwel) 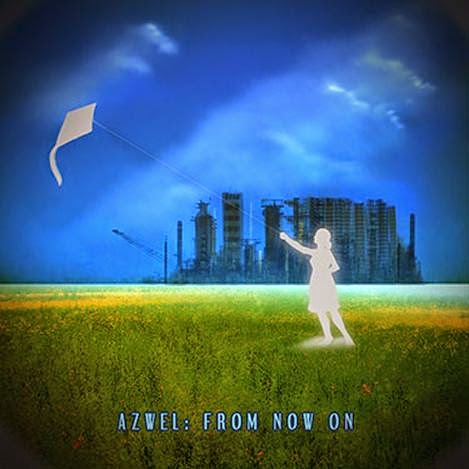 #749: Hello ... Hello ... my old friends ... It's great to see you once again! It's always nice to be sent an album to review by a new musical friend. So when Jason Perrillo a.k.a. Azwel presented me with his latest album - entitled "From Now On" - it was my great pleasure to have listen or three and put forth my thoughts on the release. ELO are listed amongst the influences for Azwel and this is evident in places with fantastic chord progressions and arrangements throughout this very finely crafted collection of songs.

Practically everything on this album is the work of this New York based prolific songwriter and multi-instrumentalist (apart from the artwork!) and it is a tremendous testimony to his talent. Indeed, this is an excellent set of songs. The contrast found in the first three (3) tracks between the guitar driven opener "Alone In The Park" (reminiscent of classic Blue Oyster Cult) with the catchy, foot-tapping (and quite frankly brilliant) "Out On A Limb" and the stringed excellence of the pensive "Convalescence" sets the tone for this balanced effort."War Against Innovation" is anthemic Brit Pop in all but name with the soulful "Don't Take It For Granted" another winner.

Jason's soft vocals overlay and caress every track and I have no hesitation in recommending that you invest your time in listening to this really good LP. Fave track for me is lead single "Out On A Limb" but all nine (9) tracks are truly top notch. A real pleasure to listen to. (8.5/10) 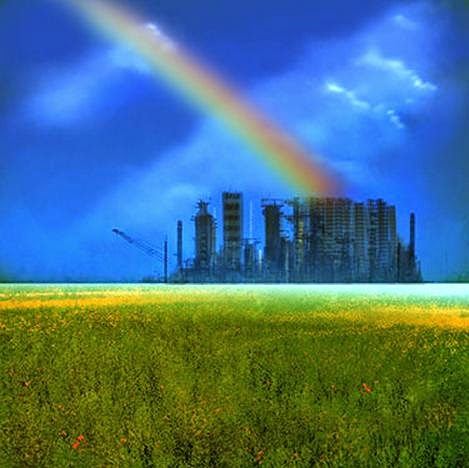 Find out more about Azwel via their official web site. "From Now On" can be purchased in MP3 format directly from the Azwel albums/download page thus:


ELO Beatles Forever (ELOBF) recommends "From Now On" by Azwel to those enlightened folks who enjoy the music of ELO/Jeff Lynne, Roy Wood, The Move, The Idle Race, 'Brum Beat', The Beatles and related artistes. 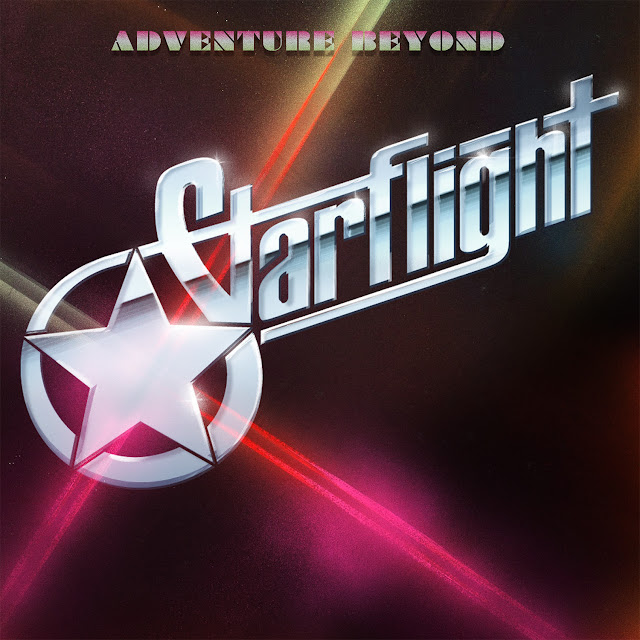 #748: Hello ... Hello ... my old friends ... It's great to see you once again! Starflight are Australian duo Damien Spanjer and Jib Khan and their latest music video for new single "She Wants An Angel" truly showcases their strong ELO and Beatles influences. Indeed, the whole of their debut album "Adventure Beyond" oozes the Fab Four and Birmingham's best with a touch of The Beach Boys for good measure.

The beautiful ballad "She Wants An Angel" (see above video) is a song that truly whets the appetite for a model Power Pop album which also includes the excellent ELOesque "In Any Light" and Beatlesque "Rocket Like A Stone", tracks that instantly impress. The clear lead vocals of songwriter Jib Khan and the added keyboards and percussion of cohort Damien Spanjer coupled with resplendent vocal harmonies throughout really make this a pleasurable record to listen to! (9/10)

Find out more about Starflight via their official web site. "Adventure Beyond" can be purchased as a MP3 download via their music page &/or from amazon.co.uk via this link.


ELO Beatles Forever (ELOBF) recommends "Adventure Beyond" by Starflight to those enlightened folks who also like ELO/Jeff Lynne, Roy Wood, 'Brum Beat', The Idle Race, The Move, The Beatles and related artistes.

#747: Hello ... Hello ... my old friends ... It's great to see you once again! What do you get when you combine a buzzing Birmingham venue with an ever improving ELO tribute band? The answer is a rip-roaring, pulsating night with The Explosive Light Orchestra (ExpLO) at The Roadhouse as evidenced in downtown Stirchley last night (Saturday 2nd August).

The South Wales based quartet overcame a power cut and a blown guitar amp to deliver the greatest hits of the Electric Light Orchestra from "10538 Overture" to "Calling America" with a twenty five (25) song set plus an impromptu instrumental whilst the technical difficulties were sorted out. ExpLO sported a dual change in personnel from their last Midlands gig at The Tackeroo but the new look band were inspired as they accurately reproduced those ELO hits we all know and love.

New guitarist Jason Ball provided some great guitar work - "Strange Magic" being a prime example - and his shared vocal harmonies with Aidan Thorne transformed their sound. Lead vocalist and founder Robin Myles clearly relished the positive reaction of the audience also gave a great performance despite his guitar woes. New percussionist Dave Purkiss was absolutely superb throughout in only his second gig, the established percussionist being a worthy Bev Bevan for the night, especially during his drum solo and finale "Roll Over Beethoven".

The measure of their success on the night was the many Brummies (and one Wulfrunian) present singing and dancing in almost perfect unison as the band played on! The band nailed the "Discovery" singles yet also managed nice versions of, in particular, "Can't Get It Out Of My Head", "Calling America", "Ma Ma Ma Belle", "Mr. Blue Sky" and my favourite of the evening: "Strange Magic". All in all, it was a fantastic return to ELO's backyard by ExpLO with the icing on the cake being the announcement that they are to return to The Roadhouse for a very special concert on Boxing Day ~ Friday 26th December. See you there?
Set list: "Standin' In The Rain" ~ "Evil Woman" ~ "Showdown" ~ "Livin' Thing" ~ "Telephone Line" ~ "The Diary Of Horace Wimp" ~ "Yellow Polka Dot Moon" ~ "Can't Get It Out Of My Head" ~ "Hold On Tight" ~ "Last Train To London" ~ "10538 Overture" ~ "Turn To Stone" ~ "Prologue/Twilight" ~ "Confusion" ~ "Shine A Little Love" ~ "Mr. Blue Sky" ~ "Wild West Hero" ~ "Ma Ma Ma Belle"/Drum Solo ~ "Strange Magic" ~ "All Over The World" ~ "Xanadu" ~ "Calling America" ~ "Sweet Talkin' Woman" ~ "Don't Bring Me Down" ~ "Roll Over Beethoven"

#746: Hello ... Hello ... my old friends ... It's great to see you once again! First thing first: This LP is so good, I had to offer up an overview for ELO Beatles Forever (ELOBF)! The only tentative link with former producer and fellow Traveling Wilbury Jeff Lynne for this the thirteenth (13th) album - "Hypnotic Eye" - by Tom Petty and his legendary Heartbreakers outfit is the input of co-producer Ryan Ulyate, who worked with Jeff for those ELO remasters and, of course, "Zoom" back in 2001. Although there are elements within the album that ooze with the production values of Jeff, this release is a real return to the early days of the band, particularly their eponymously entitled 1976 debut album and "You're Gonna Get It" (1978).

This is a strong record and a return to form for Tom and the gang with some cutting lyrics matched by the guitar artistry of Mike Campbell throughout. The record is announced by stomping lead single "American Dream Plan B" and it not only grabs your attention, it keeps your attention throughout with the familiar Petty storytelling of "Red River" contrasting with the jazzy "Full Grown Boy" and pensive "Sins Of My Youth". The R 'n' B of "Burnt Out Town" and "Power Drunk" is sheer class too. It is indeed difficult to select favourites from the eleven (11) tracks on show but, for me, the repeat button is pressed most often for "All You Can Carry" and final cut "Shadow People". These are simply magnificent creations on a release that not only rolls back the years, it rightly returns TP, literally a "21st Century Man", to the forefront of American (and world) rock. (9.5/10)

ELO Beatles Forever (ELOBF) recommends "Hypnotic Eye" by Tom Petty and The Heartbreakers to those enlightened folks who enjoy the music of ELO/Jeff Lynne, The Traveling Wilburys, The Move, Roy Wood, The Idle Race, 'Brum Beat', The Beatles and related artistes.

#745: Hello ... Hello ... my old friends ... It's great to see you once again! Joe Walsh recently tweeted that Michelle Kath Sinclair had launched a second Kickstarter campaign to fund the post-production finishing touches to the film she is making about her father Terry Kath, the legendary original guitarist, co-lead singer and a founding member of American classic rock band Chicago.

Her first Kickstarter campaign was featured by ELO Beatles Forever (ELOBF) back in October 2011 here and successfully raised the necessary $40,000 to initially make the film, to be titled "Searching For Terry: The Man Behind The Guitar".

At the time of writing, nearly 50% of the $40,000 target has been pledged with just nineteen (19) days to go to the deadline on Thursday 21st August. Please consider supporting this the second phase of Michelle's exciting project via this link thus:

ELO Beatles Forever (ELOBF) endorses "Searching For Terry: The Man Behind The Guitar" to those enlightened folks who enjoy the music of ELO/Jeff Lynne, Roy Wood, The Move, The Idle Race, 'Brum Beat', The Beatles and related artistes.