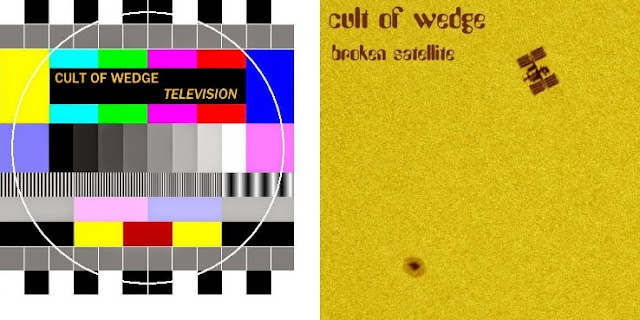 #697: Hello ... Hello ... my old friends ... It's great to see you once again! ELO Beatles Forever (ELOBF) would like to take the opportunity to inform you that the new single by Cult of Wedge - alias the multi-talented, multi-instrumentalist Pete Hackett has just been released.

"Television" b/w "Broken Satellite" sees Pete writing, performing and producing two great trax about "the hell of Saturday night reality TV" and "a lonely astronaut tuck on the ISS". "Television" is a punchy, anthemic kind of protest song whilst "Broken Satellite" sees the man from Rowley Regis pull out all the stops with a rockier number, featuring a killer guitar solo, musing on the solitude of space. Pete must be a busy man at the moment having just worked with Michael Laine Hildebrandt on the forthcoming new Bubble Gum Orchestra album"Beyond Time". He's also likely to be working again with Maxi Dunn on her fourth studio album as well as completing a new, full Cult of Wedge release! In Pete's own words:

"Cult Of Wedge is the musical alter ego of Pete Hackett. It's a bit like a car crash involving members of - ELO, Genesis, Human League, Kraftwerk, Motorhead and Yes. With John Shaft and Starsky and Hutch being the first on the scene, (and) with Beck and Air driving the ambulances!"

"Television" b/w "Broken Satellite" by Cult of Wedge was released on Saturday 12th April and is available to purchase from Bandcamp via this link thus: