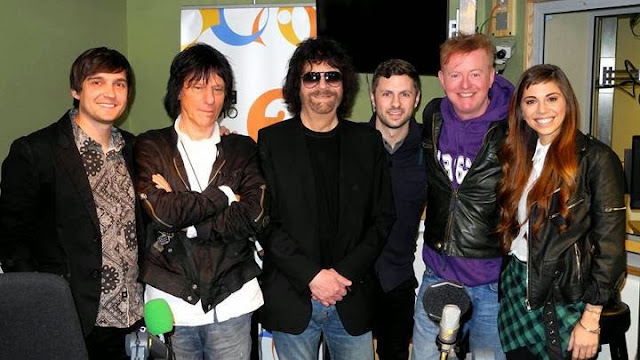 #674: Hello ... Hello ... my old friends ... It's great to see you once again! The highlight of the appearance of Jeff Lynne on BBC Radio 2 during The Chris Evans Breakfast Show this morning had to be the challenge laid down to Jeff to name the number of texts it would take for the ELO maestro to respond positively to an on air appeal by the ELO mad DJ for for a Jeff Lynne/ELO live gig in aid of the BBC Children In Need charity at Wembley Stadium next year in front of 80,000 folks. Jeff's answer was 2,000 and that number was exceeded within seconds. We look forward to Jeff's management team confirming the date in the near future! Jeff came on air at 8:06AM or after 1 hour 36 minutes. Listen to the show via this link below thus: bbc.co.uk/programmes/b03wpsfc

Jeff mentioned that he was "pleased as punch" in advance of receiving his double Brummie accolades this and next week. He also confirmed during the interview, in which he was joined by Jeff Beck and Christina Perri, that it was indeed old pal Roy Wood who came up with the name: The Electric Light Orchestra.
Earlier this week, Jeff revealed the major news (hinted at here previously by Yours Truly KJS) that he was working with Canadian rock legend Bryan Adams - who was, of course, a bestselling co-contributor to the "Robin Hood: Prince Of Thieves" OST back in 1991 with Jeff's "Wild Times" also featuring. Chris Evans played "Livin' Thing", "Handle With Care", "Free As A Bird" and "Superstition" during the show segment with Christina Perri contributing a trio of live songs including her latest single "Human".