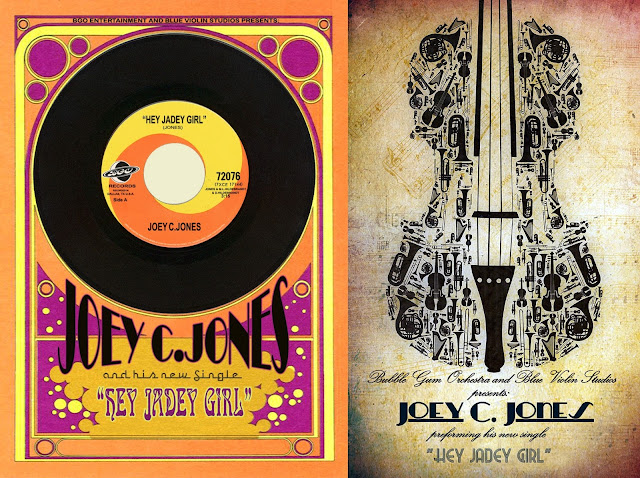 #665: Hello ... Hello ... my old friends ... It's great to see you once again! Yours Truly KJS and ELO Beatles Forever (ELOBF) are pleased to report that the latest exciting project that has come out of the Blue Violin Studios of Bubble Gum Orchestra maestro Michael Laine Hildebrandt is the new single by Joey C. Jones entitled "Hey Jadey Girl".

Joey C. Jones was the lead singer of legendary eighties rockers Sweet Savage, the Ohio foursome who became a live legends in the US - and LA's 'Sunset Strip' in particular - between 1984 and 1989 before splitting. Sweet Savage topped the European Import chart for sixteen weeks back in 1986 with their self-titled five track EP and turned down a deal with Enigma Records which was then taken up by a certain successful US rock band by the name of Poison. More latterly, Joey has been performing with The Gloryhounds to rave live reviews.
"Hey Jadey Girl" is a beautiful three minute tribute to his daughter Jade (written by Joey himself) engineered and produced by Michael Laine Hildebrandt with the assistance of brother Douglas. With nice guitar licks, superb vocals and marvellous string arrangements so reminiscent of ELO in their seventies heyday, the song is literally short and sweet, both a loving gift to a daughter and a hat-tip to musical heroes. Fans of ELO will undoubtedly love this. (10/10)

"Hey Jadey Girl" by Joey C. Jones is available to purchase via these links thus: