#647: Hello ... Hello ... my old friends ... It's great to see you once again! Ben Jones, who is one half of ELOBF featured artiste ELduO became aware of my interest in the TV series The Walking Dead last year. He told me that his brother Craig Jones was a writer who had published a book entitled Outbreak: The Zombie Apocalypse and he wondered if Yours Truly KJS like to read it for reviewing purposes.
A paperback copy of Outbreak: The Zombie Apocalypse duly arrived in the post a few days later and - although it's totally unrelated to anything in the KJS/ELOBF universe (except perhaps the intro to ELO's "Fire On High" and "Disturbance", the 'B' side of the "Night Of Fear" single by The Move!) - here's my mini-review of Craig's novel thus: 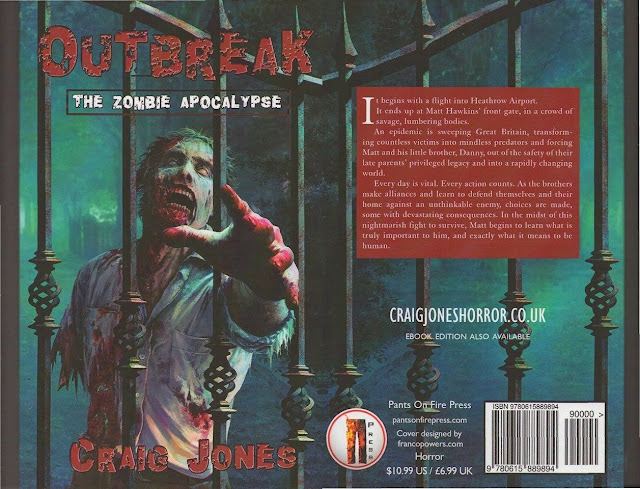 Outbreak: The Zombie Apocalypse (Pants On Fire Press: ISBN 9780615889894) by Craig Jones is an interesting take on a literary genre full of familiar zombie scenarios and content. It's the story about the outbreak of a highly contagious disease (and its effects) that rapidly disperses throughout the UK population. What makes this book stand out for me is that it is essentially a unique tale, written in the third person narrative, of two brothers living in the Welsh market town of Usk in Gwent and how they deal with their own issues amidst the ensuing chaos outside the walls of their bequeathed family home. The book has its measure of normality, tragedy and many ups and downs as the outbreak is rolled out. The book details the transformation in the brothers attitudes to life, their neighbours and each other during the horrific happenings in their vicinity. The story builds ominously as the seemingly national disaster runs its course and then shifts up a gear in an action packed finale that ends in nearby Cardiff. A good read without the usual zombie clichés but with plenty of geographic familiarity and a well thought out plot. (8/10)

Outbreak: The Zombie Apocalypse by Craig Jones is available from amazon.co.uk and all good booksellers. You can also download the Kindle Edition of the book for free here