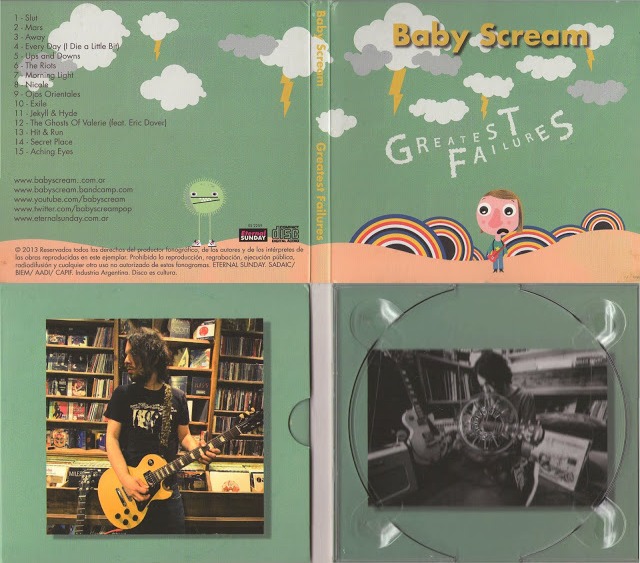 #637: Hello ... Hello ... my old friends ... It's great to see you once again! You may recall that Yours Truly KJS and ELO Beatles Forever (ELOBF) have featured Baby Scream - the musical vehicle of Argentinian singer, songwriter and musician Juan Pablo Mazzola - a couple of times in 2013 including a review of the re-release of their eponymously titled 2010 album here.

Back in January, Juan told me: "I'm a huge ELO/Beatles fan, and what I do is basically classic Power Pop!" and his new compilation "Greatest Failures" really is a tremendous showcase of the Baby Scream decade long recording career, basically from 2002 up until 2013. Fifteen great songs are squeezed into less than 45 minutes as this swift overview showcases an artiste who I summarised previously as being the result of crossing "T.Rex with David Bowie and (throwing) in a little Tom Petty". From the lyrically shocking opening of the first lines of "Slut" (a song of remorse written around the death of his father) through to the most recent track "Aching Eyes", Juan Pablo Mazzola writes and performs near perfect Power Pop gems which please upon hearing and will appeal to any T.Rex, Bowie, Dylan, Petty, Van Morrison and Jeff Lynne fan. There are no weak tracks included in this compilation with the Bowiesque "Mars" impressing as well as the raucous "Every Day (I Die A Little Bit)", the sublime "Morning Light", the string-laden ELO influenced "Nicole", the anthemic "Jekyll & Hyde" with the Van Morrison inspired "Secret Place" bringing up the rear with the superb Bolanesque "Aching Eyes".

"Greatest Failures" - ironically - is of tremendous credit and testimony to the talent of Juan Pablo Mazzola. There is a great range of tempo and style within this release to quickly impress the listener and it makes for a worthy addition to the collection of any Power Pop addict. (9/10)

You can sample and/or buy most of the Baby Scream back catalogue via these links:

"Greatest Failures" by Baby Scream is or will soon be available to purchase from:

You can also buy the CD directly via email from: babyscream2000@yahoo.com