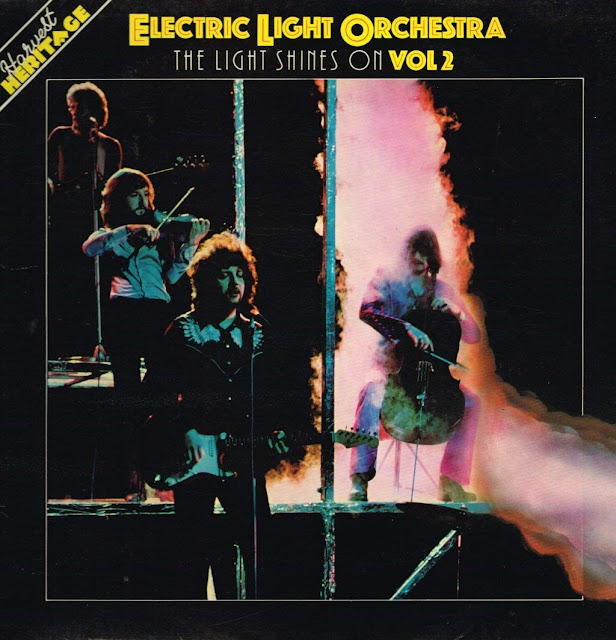 #596: Hello ... Hello ... my old friends ... It's great to see you once again! I guess you knew that this was coming after yours truly painstakingly reproduced the sleeve notes from the 1977 Harvest Heritage compilation by Colin Miles entitled "The Light Shines On" (SHSM2015)!

So, here are the reverse LP cover notations from the 1979 follow-up Harvest compilation "The Light Shines On Vol. 2" (SHSM2027) by the self same Harry Doherty for you to also peruse thus:

"Since we last spoke the ELO success story has taken yet another giant step forward. The eight night residency at the Wembley Empire Pool last June emphasised (as if it needed emphasising) that the Electric Light Orchestra were indeed a unique phenomenon in contemporary Seventies' pop, oddly joining a club that includes Abba, Fleetwood Mac, Elton John, Rod Stewart and Boney M as its elder statesmen.

"The Light Shines On", this album's predecessor, was designed in part to show British audiences, who, let's face it, were embarrassingly slow to catch onto ELO, that the present-day ultra-commercialism of the music had, at its roots, an admirable sense of adventure  and experimentation. So mush so, in fact, that although the music was essentially hummable pop, it went totally over the heads of home audiences circa 1971-1973. Harvest, who possess the rights to the first two ELO albums - "The Electric Light Orchestra" and "ELO 2" - are singularly determined to sustain their faith in that early material. Hence Colin Miles' second compilation.

And - please - will you sit up and take notice this time. If you're a real ELO fan, there's a lot to be learned from this early stuff, you know.

To recap, let's briefly recall the birth of the Electric Light Orchestra. The original band was very different from today's troupe. It all started back in 1968 when Roy Wood, becoming rather bored with the limitations that the Move was imposing, looked for another vehicle. Jeff Lynne, a latterday Move member who later professed that he joined them from his own group, Idle Race, as a means to an end (i.e. today's ELO which he has total control over), and drummer Bev Bevan, concocted to form the Electric Light Orchestra with him.

Out came the first album and the pretentiousness of the concept - violins, cellos, oboes and horns were being touted as the future of rock and roll ("It took me ages to get that violin out of me ass," Lynne later joked) - proved too much for critics and public alike. But under all the superficial gloss was a solid pop album with interesting experimental overtones. There were a couple of classic tracks, notably "10538 Overture" and "1st Movement (Jumping Biz)", both of which appear on this album. From the blatant patronising nature of the titles, you can judge why ELO were being called pretentious.

With Wood being put in the limelight although Lynne wrote half the material, there was, not surprisingly, a good deal of discontent within ELO. Roy admirably took the ultimate solution to the problem by quitting and leaving the entire show to Lynne, whose eloquence, we've since learned, is not displayed through Press interviews but through his music. With a possible clash of egos erased, Lynne set about realising his vision of the band and the vital addition in that respect was undoubtedly keyboard's player Richard Tandy, still his right hand man.

"ELO 2" was still shrouded slightly in a vague cloak of experimentation which sometimes worked and sometimes didn't but there was always the impression that Lynne's brilliance would shine through. On "From The Sun To The World (Boogie No. 1)" and "Kuiama", which conveniently appear on this compilation, Lynne showed that he could mess about with the structures and overburden arrangements with strings and still come out with a good pop tune. That was the most fascinating aspect of ELO's approach at that time.

But they still couldn't break through to a major audience and only spasmodically, with obvious adaptions like "Roll Over Beethoven", did they make the charts. It wasn't until he arrangements were watered down further, with the string section playing more of a complimentary role than being to the forefront, was Jeff Lynne's value appreciated.

It's for that very reason that you should listen attentively to these early works. Okay?"
HARRY DOHERTY"