#598: Hello ... Hello ... my old friends ... It's great to see you once again! With an album cover reminiscent of their classic 1982 LP, "Chase The Dragon", Midlands rockers Magnum have just announced the release of their nineteenth (19th) album, entitled "Escape From The Shadow Garden" and is released in the UK on Monday 24th March via the German label SPV/Steamhammer. 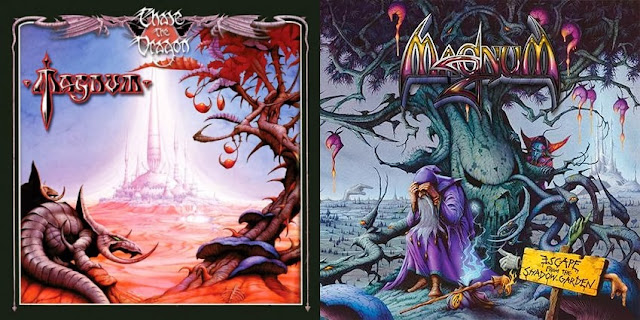 Many Electric Light Orchestra (ELO) fans will recall that Magnum were label mates with ELO on Jet Records between 1978 and 1983, releasing five albums with significant chart success thus:

"Kingdom Of Madness" (JETLP210; 1978; #58)
"Magnum II" (JETLP222; 1979)
"Marauder" (JETLP230; 1980; #34)
"Chase The Dragon" (JETLP235; 1982; #17)
"The Eleventh Hour" (JETLP240; 1983; #38)
Source: www.officialcharts.com/artist/magnum
Magnum, who once featured Dave Scott-Morgan in their ranks, have had many ELO connections throughout their career. Whether it be sharing labels with both ELO (at Jet) and ELO Part II (at SPV) or keyboardist Mark Stanway working with both Phil Bates (Wheels Of Fire) and Carl Wayne, both bands have earned the respect of and continue to retain a significant fan base. Yours Truly KJS also interviewed Mark Stanway back in early January 2011 in advance of their album "The Visitation" and you can read that interview here
ELOBF very much look forward to this follow-up to "On The Thirteenth Day". Further details of the album and the forthcoming 2014 European tour promoting "Escape From The Shadow Garden" can be found via their official web site thus:
www.magnumonline.co.uk
ELO Beatles Forever (ELOBF) recommends Magnum to those enlightened folks who enjoy the music of ELO/Jeff Lynne, The Move, Roy Wood, The Idle Race, 'Brum Beat', The Beatles and related artistes.
Until next "Time" in the ELO (and related) Universe ... KJS ... 10-Oct-2013
Posted by Keith J Sinclair at 20:17