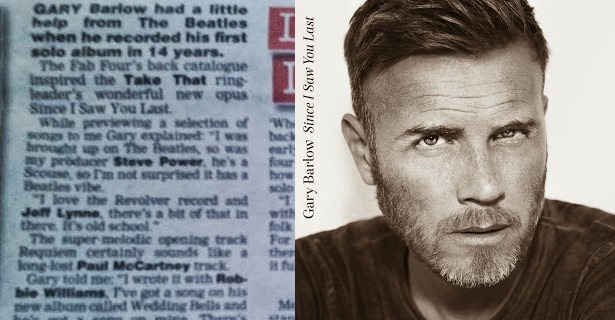 #597: Hello ... Hello ... my old friends ... It's great to see you once again! With thanx to ELOBF's roving reporter in South Wales, Mark Burrows. The Saturday 5th October edition of The Daily Star features an interesting interview with Gary Barlow on the subject of his new solo album "Since I Saw You Last", which is released on Monday 25th November. What is of interest to Yours Truly KJS/ELOBF is that in the interview with Kim Carr, Gary states:

“I was brought up on The Beatles, so was my producer Steve Power, he’s a Scouse, so I’m not surprised it has a Beatles vibe ... I love the Revolver record and Jeff Lynne, there’s a bit of that in there. It’s old school.”

We are also told in the interview that the album opener:

"Requiem" sounds"... like a long-lost Paul McCartney track" and that in Gary's own words: "I like the acoustic thing ... [the] last Take That album Progress had a lot of synths and drum mach­ines. I felt I want to strip things back again - no synths, all acoustic instruments."

Gary has form as an artiste inspired by Jeff Lynne and ELO. The track "Shine" from the Take That comeback album "Beautiful World" in 2006 is not only ELOesque, it was also preceded by the finale to "Mr. Blue Sky" from "Concerto For A Rainy Day" in their "Beautiful World Live" show and subsequent DVD release. These early ELOBF articles highlighted this at the time:

New single "Let Me Go" precedes the album on Sunday 17th November and tickets for Gary's 2014 solo arena tour go on sale at 9AM on Friday 11th October. The Deluxe Edition of "Since I Saw You Last" is currently available for pre-order via amazon.co.uk.

ELO Beatles Forever (ELOBF) recommends "Let Me Go" and "Since I Saw You Last" by Gary Barlow to those enlightened folks who enjoy the music of ELO/Jeff Lynne, Roy Wood, The Move, The Idle Race, 'Brum Beat', The Beatles and related artistes.