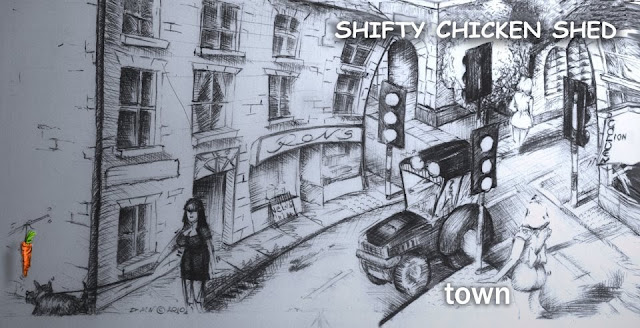 #586: Hello ... Hello ... my old friends ... It's great to see you once again! Back in January 2013, you may recall that ELOBF published an article in support of a e-petition campaign to call for the prevention of certain web sites block buying venue tickets and re-selling them at extortionate prices on the internet thus:

Petition to Protect All Fans of Live Music

The instigator of that petition was Deborah Harris from the uniquely titled outfit Shifty Chicken Shed hailing from Oswestry in Shropshire. Deborah has stayed in contact and recently sent me the debut SCS album "Town" to have a listen to and review accordingly for ELOBF. "Town" is a quirky and eclectic collection of ten (10) original tracks (plus another somewhat hidden away!) by a band who throw themselves into many musical styles with not only their obvious jazz, blues and funk influences but also - in places - soaring saxophone solos, throaty Joe Cockeresque vocals, nice guitar riffs and even spoken word.

You could say that this recording is experimental and even manic. But throughout it has a progressive feel to it coupled with its subject matter of all things 'local' and in "Town". You can't help but smile after a listen or three. There is comedy here too but also an honest attempt to not conform to musical labels, as evidenced by the many changes in tempo within the songs and the impressive running time of fifty five (55) minutes. I'm reminded a little here of the multi-instrumental expressionism of "Saxmaniac" Roy Wood both in his solo and early ELO material in certain places. The quirkiness of this recording is not unlike that of The Idle Race in their heyday. I quite like it. (8/10)

ELO Beatles Forever [ELOBF] is pleased to support: Shifty Chicken Shed and managed to catch up with Innes Reid and Deborah earlier this week to ask them these few loaded questions thus:

KJS: I first saw you supporting Dr. Feelgood at The Robin2 last December. After that we chatted on Facebook and a little later, you began a very special e-petition campaign (supported by KJS/ELOBF) didn’t you? Please tell us about it?
SCS: We saw Wilko Johnson and Norman Watt-Roy play at Llangollen fringe last year as well as with The Blockheads at The Robin 2 and we've been avid fans of all including the original Dr. Feelgood line up. I was upset to hear the news of Wilko and thought him very brave to do a final round of gigs. The Robin is such a wonderful venue to both play and be one of the audience. When I heard that Wilko was playing The Robin  I wanted to bid him farewell. The tickets were just £17.25 each but when I went to go on line to my disgust, Viagogo had already bought them out and were charging an astounding £125 each, knowing full well that this would be one of the last Wilko gigs and totally exploiting the situation. I could not let them get away with this, from both an artist and a punters point of view, I had to create awareness of their obscene greed. So I started an e- petition, got involved with The Robin2, and have recently found out that eBay have stopped this sort of behaviour. It is something I will continue to see through.
KJS: I absolutely love the name of the band. But where did it come from?
SCS: Initially, Shifty had two members, Innes Reid and Stewart James. They rehearsed in an old chicken shed, on a farm. It was a skiffle thing. And in the words of Tom Waits: "What's he building in there?" Hence the Shifty part!
KJS: You’ve recently also supported The Rutles. That must have been a real highlight of your career to date. But what other bands have you shared the stage with and what kind of reaction do you get from your audiences?
SCS: Yes indeed! The Rutles were amazing, we never expected that one (thanks to Mike at The Robin). We started sharing the stage back in January 2012 with the legendary: Half Man Half Biscuit, again at The Robin. We then supported Peter Donegan with some of the original members of The Lonnie Donegan Band. Later in the year, we went on to support one of our favourite bands, The Blockheads at Sale Waterside Arts Centre in Manchester and then we were off to The Greystones in Sheffield to support John Otway. We finished 2012 (on 12/12/12) with Dr. Feelgood at The Robin 2. We'll be back again at The Robin in April next year to again support The Blockheads, and also on 29th November 2013 to support Half Man Half Biscuit at Roadmenders, Northampton. Audience reaction? Well we must say that it has been very good and encouraging, hence us getting asked back. Early days were a different story, there have been small pubs we played for free where you could hear a pin drop, no applause, but a thick skin and belief in what you do, (and a few pints) soon puts any doubt to bed!
KJS: Tell me about the new SCS album "Town" – what are its influences and what did you intend with the recording?
SCS: The influences for "Town" were a mixture of seventies slapstick TV, Captain Beefheart, The Blockheads, Funkadelic and Sly & The Family Stone, melded with a blues and punk DIY ethic. Coming from a small Welsh market town, we wanted to create a collection of tongue-in-cheek, colloquial tales put to rhythm and blues psychedelia but without being too up our own ass about it!
KJS: And finally, a question that I always ask ELOBF interviewees – what are your fave ELO and Beatles songs – and why?
SCS: With ELO, it's "Telephone Line" for all of us. Why? It has a great chorus, we like the idea of a long distance conversation to your loved one within a song. It's got great dynamics and builds beautifully. For The Beatles, it's "A Day In The Life". It's as if Lennon and McCartney dissected then spliced it together on reel to reel. Tidy!

"Town" by Shifty Chicken Shed is available to purchase via email at deborah@hotmail.co.uk and also by contacting the band via their Facebook page. Their debut album will also be available to buy in CD or download format from amazon.co.uk et al in the near future.