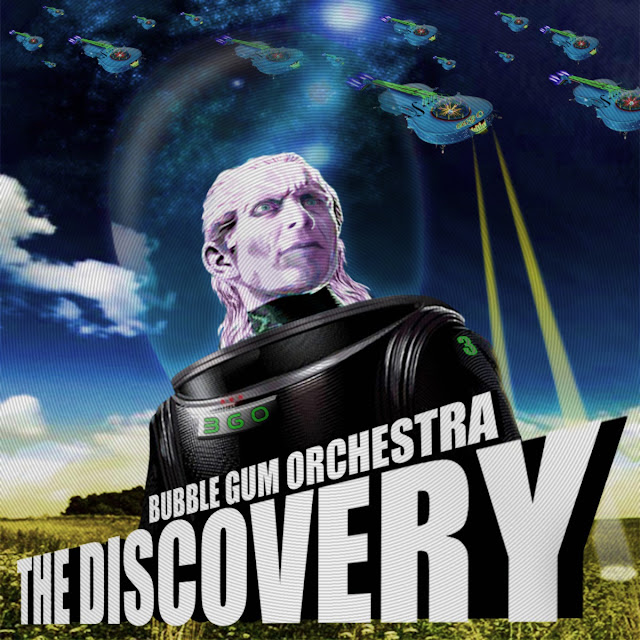 #583: Hello ... Hello ... my old friends ... It's great to see you once again! Having safely negotiated the challenge of producing a successful follow-up to the excellent "Out Of This World" (2011) with "BGO II" (2012), Bubble Gum Orchestra (BGO) supremo Michael Laine Hildebrandt (MLH) had promised the third instalment of this - his heavily ELO influenced project - for 2014 but was so excited by it that we, luckily, are seeing it here in late August 2013! 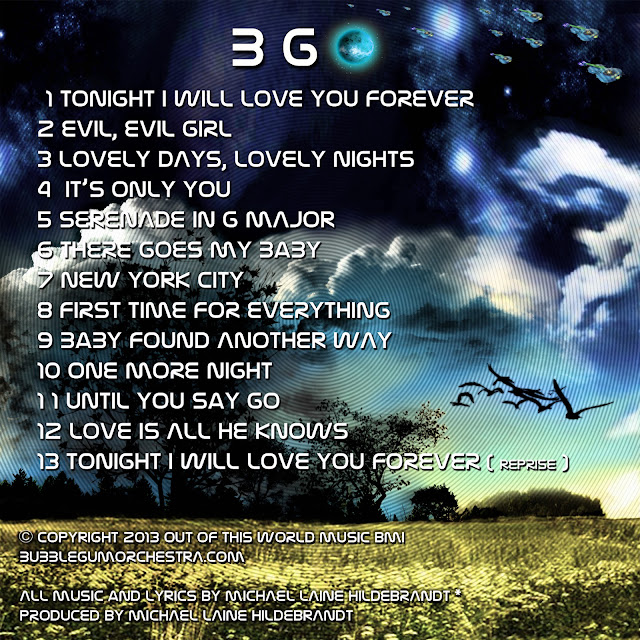 ELOBF has been privileged to be able to listen to new BGO offering: "The Discovery" for the last few weeks or so and have to say that I share the enthusiasm of MLH regarding BGO III. Once again, Mike has enlisted the services of legendary Wings trumpeter Steve Howard and also former Sugarbomb member Les Farrington with brother Douglas also significantly contributing in terms of music and lyrics too:

"The Discovery" is a well rounded album with much more guitar input - and significantly longer in running time than "BGO II" - which displays all the elements of previous BGO releases yet has an air of maturity in the song order, construction and arrangements with the effect of producing a set of songs that ooze the obvious influence of Jeff Lynne, ELO and The Beatles. Here is a brief ELOBF overview of all thirteen (13) trax to whet your appetite thus:

"Tonight I Will Love You Forever"
We were promised a "wall of sound" for this one and this opening track arrives amidst a crescendo of keyboards for a love song high in energy and passion that provides just that! A worthy opener.

"Evil, Evil Girl"
"Your pouting lips and your long black hair ...": Lead single and rightly so! Nice keyboard, catchy guitar riff and strings ... a song that is reminiscent of "Evil Woman" but with a dab of "Discovery" me thinx! A great brothers Hildebrandt collaboration.

"Lovely Days, Lovely Nights"
Featuring Les Farrington on an unashamedly upbeat song that begins with a punchy piano solo and develops into an anthemic bubblegum pop gem with an ELOesque finale.

"It's Only You"
Douglas Hildebrandt composition which starts with a stripped down guitar opening riff and builds into the love song of a devotee underlined by a punchy bass line and impressive chorale backing.

"Serenade In G Major"
Instrumental interlude following in the same vein as "Movements In A Major".

"There Goes My Baby"
This superb song commences with an amazing intro that would not be out of place on any latter ELO album in its own right and must a contender for "Intro Of The Year"! A real rocker with all kinds of stereo vocal gymnastics with another impressive trumpeting contribution by Steve Howard.

"New York City"
"Strawberry Fields in our hearts": A song all about a romantic whirlwind trip to NYC with affectionate mentions of Coney Island, 52nd Street, Times Square et al and replete with prominent guitar, cello, strings and keyboards leading the way!

"First Time For Everything"
Another MLH song with more catchy guitar riffs and more Steve Howard input. The influence of The Beatles is found throughout this number from its synthesized string and piano intro onwards. Impressive.

"Baby Found Another Way"
A fusion of orchestral pop and soul which truly demonstrates the versatility of MLH and BGO with cello and string underscoring a slightly slower pace composition,with nice sampled guitar solo too. Mellow.

"One More Night"
Magnificent! Hildebrandt brothers Michael and Douglas again combine to produce another class ELOesque track that oozes class and that: Jeff Lynne influence. If "Evil, Evil Girl" has undertones of "Evil Woman" then "One More Night" is superb in the style of "Showdown". A passenger in my car recently asked me "Is this a new ELO song?" That just about says it all!

"Until You Say Go"
A mournful vocoder intro leads into another catchy song of devotion and pleading with a simply unforgettable chorus. Underpinned by yet another marvellous acoustic guitar riff and a real credit to MLH and BGO.

"Love Is All He Knows"
A song about the beauty of the Creator and the order of creation with more sublime synthesisers in tandem with sweeping chorale.The instrumental folk bridge is not only surprise to the listener but also another nod to the creative prowess of MLH.

"Tonight I Will Love You Forever (Reprise)"
Beautiful "Underture", "Epilogue" and album closer all in one to seal an impressive release.

"The Discovery" by Bubble Gum Orchestra will be available to purchase in either download or CD format from Tuesday 27th August via this music outlet thus:

The album artwork, with its violin laden sky scape, is indeed reminiscent of that wary traveller of "Time" arriving in a strange yet familiar land and the inclusion of the closing reprise adds to this feel. This impressive release is well worth the attention of any ELO, Jeff Lynne and/or Beatles fan. (9/10)

ELO Beatles Forever (ELOBF) recommends and endorses "The Discovery" by Bubble Gum Orchestra [BGO] to those enlightened folks who enjoy the music of ELO & Jeff Lynne, Roy Wood, The Move, The Idle Race, 'Brum Beat', The Beatles and related artistes.