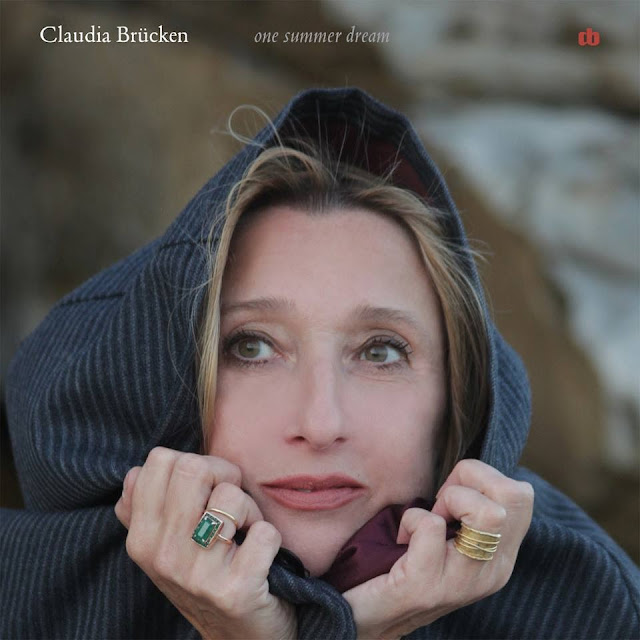 #580: Hello ... Hello ... my old friends ... It's great to see you once again! Earlier today (Thursday 8th August), Yours Truly KJS had the opportunity to converse with Claudia Brücken and, by extension, producer Stephen Hague (New Order, Pet Shop Boys, OMD) about Claudia's stunning new EP "One Summer Dream" - a lovely interpretation of the classic Electric Light Orchestra tune from "Face The Music" and the 'B' side (of course) of ELO's UK Top 10 single: "Mr. Blue Sky".

The track, released on Monday 5th August, by the former Propaganda star (remember their fabtastic hit "Duel" on ZTT Records back in 1985?) comes from her critically acclaimed covers album entitled "The Lost Are Found" (released back on 5th November 2012). The EP continues the superb album version plus three (3) remixes. Have a listen to this excerpt from the Severino Panzetta Mix thus:

KJS: How did your cover of: "One Summer Dream" come to fruition?
CB: "Hi Keith! It’s nice to hear from you! I’m very happy to hear that there has been a positive response to Stephen's and my version of "One Summer Dream". I've always been huge ELO fan and when Stephen approached me to cover "One Summer Dream", I was very excited at the prospect of interpreting this gorgeous song with it's beautiful melancholy melody and lyrics. As it was Stephen who approached me, I thought it was a good idea to forward your questions to him as he was the one who came up with the idea of covering it. So here are his answers! I agree with him on the long list of favourites, there are too many to single out! I adore Jeff Lynne's song writing, his musicianship and his voice."
KJS: "What inspired you to cover "One Summer Dream"?"
SH: "A music supervisor friend of mine asked me if I had anything 'dreamy ... about summer' for a film she was working on. She practically said the title! I've always loved that song; one of Jeff Lynne's overlooked gems I reckon. Claudia and I had just been writing together, and I thought she'd sound great on it, so we did this version as a cover. in fact she sounded so good, we decided to try a whole album of covers ... and this song was the first."
KJS: "Is this your favourite ELO song or are there others?"
SH: "It's a long list of favourites! He's a great songwriter, and let's face it, singer, guitarist, arranger and top producer ... b******s!"

Both "One Summer Dream" and "The Lost Are Found" can be purchased via these links thus:

Why not also visit the Official Claudia Brücken web site to find out more about the release thus:

ELO Beatles Forever (ELOBF) would like to extend their thanx to both Claudia Brücken and Stephen Hague for their valued contribution to this article.

ELO Beatles Forever (ELOBF) recommend "One Summer Dream" and "The Lost Are Found" by Claudia Brücken to those enlightened folks who also like ELO/Jeff Lynne, Roy Wood, 'Brum Beat', The Idle Race, The Move, The Beatles and related artistes.