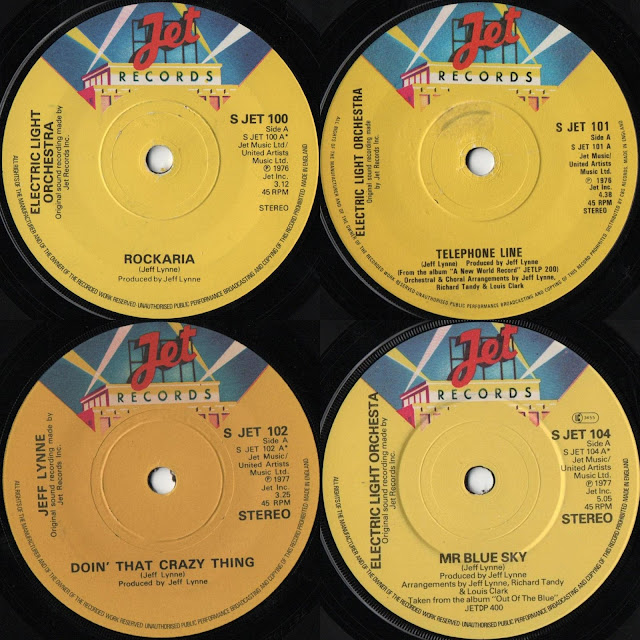 #570: Hello ... Hello ... my old friends ... It's great to see you once again! Most ELO and Jeff Lynne fans will know that within six months of the original release of "Out Of The Blue" (#UAR100) back in October 1977, Don Arden and Jet Records had dropped United Artists as their distribution agent and signed up with CBS Records. This meant that OOTB and all of the ELO album back catalogue from "On The Third Day" onward were hastily re-issued with new catalogue numbers, all of which were also pressed in limited edition coloured vinyl (OOTB was assigned #JETDP400). What some folks are not aware of is that the self same re-issue campaign was also applied to a few selected ELO and Jeff Lynne single releases from 1976 and 1977 with new Jet catalogue numbers allocated for "Rockaria" (#SJET100), "Telephone Line" (#SJET101), "Doin' That Crazy Thing" (#SJET102), "Turn To Stone" (#SJET103) and "Mr. Blue Sky" (#SJET104). The new 7" Jet/CBS singles included a not-so-well-known pressing error with the 'B' side of "Telephone Line" having the twin tracks "King Of The Universe" and "Poorboy (The Greenwood)" in opposite running order to that of the original Jet/UA 7" release (#UP36254). Over in Holland "Mr. Blue Sky" (#JET104) saw release with a single edit 1 minute and 21 seconds shorter than the UK edition thus: 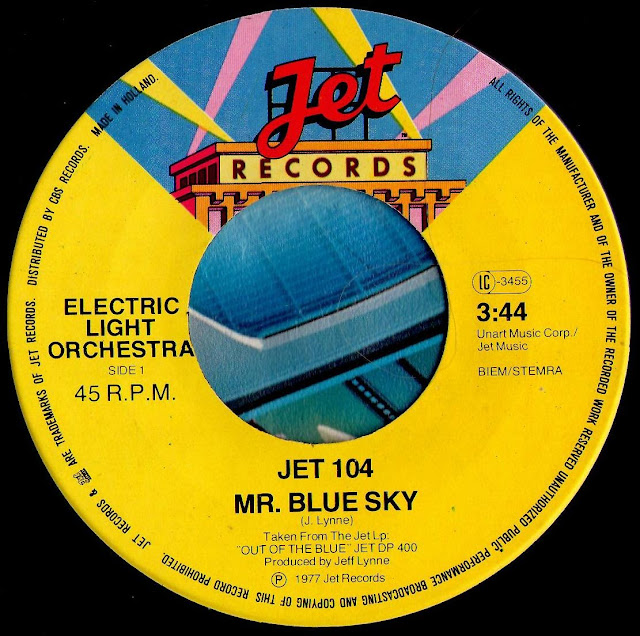 The aforementioned mystery is simply that neither ELOBF nor many other ELO vinyl collectors have never witnessed a physical copy of the aforementioned "Turn To Stone" b/w "MisterKingdom" (#SJET103) reissue - as can be evidenced by the above pictures! There is a possibility that a phantom catalogue number was created to assist any post-chart sales of original Jet/UA release stock (#UP36313), but this is unlikely given that the other four reissues were available to buy.

Yours Truly KJS & ELO Beatles Forever (ELOBF) would like to hear from anyone with a physical copy of this ultra rare single - even a picture would be most appreciated!