#574: Hello ... Hello ... my old friends ... It's great to see you once again! I've had the great pleasure of talking a lot with Michael Laine Hildebrandt (MLH) of Bubble Gum Orchestra (BGO) this year initially with a view to publishing the ELOBF interview with Steve Howard and more recently in the build up to the imminent release of the third BGO album which is entitled "The Discovery" and is due for release during late August or early September at the time of writing.

"The Discovery" will comprise thirteen (13) tracks including a reprise of the opening wall of sound that is "Tonight I Will Love You Forever" and a short instrumental "Serenade In G Major". This much anticipated record will be available as in download and CD formats. Back in June, ELO Beatles Forever (ELOBF) published this article and it included a short preview of one of the new BGO album tracks "Lovely Days, Lovely Nights". MLH has also shared the original raw mix of another of the new BGO III tracks with me entitled "Baby Found Another Way". Both samples alone suggest that "The Discovery" is going to be one of the highlights of the year for fans of the classic ELO sound.
Now for something even more exciting! ELOBF is pleased to be able to exclusively announce that the lead single from the new album will be "Evil, Evil Girl" - a bouncy semi-orchestrated tune with a catchy guitar riff reminiscent of ELO's "Evil Woman" but with a sound that reminds this writer very much of the production values of that 1979 ELO best seller "Discovery". 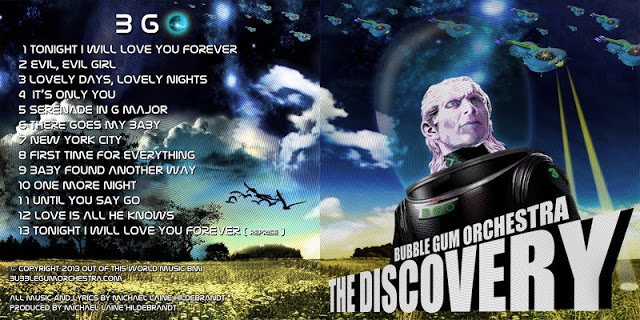 "Evil, Evil Girl" by Bubble Gum Orchestra is now available to download and can be purchased from: bubblegumorchestra.com

While we await the official release of "The Discovery", you can check out my 2011 interview with Michael Laine Hildebrandt and/or these album reviews of the first two BGO albums thus: