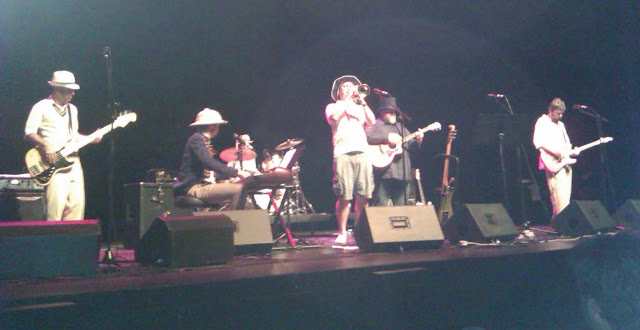 #568: Hello ... Hello ... my old friends ... It's great to see you once again! The sixty mile late afternoon drive to The Nottingham Playhouse by Yours Truly KJS yesterday [Tuesday 9th July] was full of anticipation as to what would transpire at my very first Duckworth Lewis Method gig - and that expectation as more than fulfilled during a hot Summer evening rife with eve of Ashes fever.

Even before the first chords were struck on the night, I had the opportunity on a Nottingham back street to engage in a conversation or three with the enigmatic and quirky soul who is DLM and Divine Comedy founder Neil Hannon as well as DLM and erstwhile Pugwash guitarist Tosh Flood who, by the way, is a true SME [Subject Matter Expect] when it comes to The Small Faces - who were, of course, contemporaries in many respects to both The Idle Race and The Move back in the day. Undoubtedly, there is much satisfaction in the DLM camp with the success of "Sticky Wickets" if not a little skepticism as to the worthiness of the present day charts.

The first innings of the evening [back in the theatre] was provided by the talented Left With Pictures, a London based five piece chamber folk combo who performed an impressive half a dozen songs that, judging by the queue to buy their latest album "In Time", hit all the right notes for the audience. Next up was an entertaining live on-stage interview by none other than David Hepworth with Channel 5 cricket analyst and guru Simon Hughes on the subject of the game itself, its characters, the Ashes [naturally!] and his new book entitled "The Ashes: Cricket's Greatest Rivalry: A History Of The Ashes In 10 Matches".
It was then finally time for The Duckworth Lewis Method to arrive on stage, fully uniformed, with special guest Billy 'The Trumpet' Cooper [the England 'Barmy Army' principal trumpeter and cheerleader] fresh from his Trent Bridge trumpet ban yet a welcome addition to the ranks of DLM for the night. The world's #1 cricket pop band then launched into "Sticky Wickets" and a fifteen [15] song set with shared input from both studio albums that culminated with a rousing and apt "Test Match Special".
The trumpet solos of Mr. Cooper blended effortlessly into a performance where Messrs. Duckworth and Lewis were constantly and joyfully interacting with both themselves and the captivated watchers in the 770 capacity venue. Whether it was the complex funk arrangements of "Line And Length" or that much-loved Shane Warne parody "Jiggery Pokery" ... all of the Neil Hannon and Thomas Walsh compositions on show were accurately and successfully translated to the live stage much to the delight of us onlookers. Looking at the above set list, it really is easier to try to remember what songs were not played, such was the completeness of the songs selected for the show. Hilarious was that ad hoc Hannon impression of David 'Bumble' Lloyd during "Third Day"! We watched as Neil and Thomas fenced over who would take off their hats first and constantly added their comedic flavour between songs - oft with the support of fridge magnet collector in general and guitar wizard Tosh Flood. The contribution of bassist Simon Little and the neat percussion of Tim Weller should not be understated either.

The vocal harmonies were spot on too. There were times during this gig that I closed my eyes and I could almost hear the dulcet tones of ELO and Jeff Lynne. But my lasting impression of the evening was of a band truly at ease with itself that was able to produce a kind of musical sporting heaven to the eyes and ears of this particular writer. ELO Beatles Forever [ELOBF] strongly suggests that you get your tickets for the upcoming September tour, if you haven't already done so.
Extras: The Duckworth Lewis Method will continue their UK tour between Friday 20th and Sunday 29th September. Details can be found within this special ELOBF DLM Gig Guide thus:

ELO Beatles Forever [ELOBF] recommends "Sticky Wickets" by The Duckworth Lewis Method to all folks who enjoy the music of ELO/Jeff Lynne, Roy Wood, The Move, The Idle Race, 'Brum Beat', The Beatles and related artistes.