#567: Hello ... Hello ... my old friends ... It's great to see you once again! Following on from my visit to see the abridged acoustic version of Quill last month in deepest, darkest Worcestershire, it was entirely natural that Yours Truly KJS should take the earliest opportunity to see the fully electrified manifestation of Quill during their latest appearance at The Robin 2 last night [Sunday 7th July].

After an impressive support set from Under A Banner, complete with their classy new single "Some Stories" in aid of Help For Heroes, the decision was instantly vindicated as this long established six [6] piece Midlands based Celtic Rock outfit delivered a powerful and stirring set that included covers, originals and traditional instrumentals including their own unique interpretations of classic songs by the likes of Fleetwood Mac, The Waterboys, Dream Academy, Deacon Blue and Mike Oldfield [amongst not a few others].

This band oozes zest and life when unleashed on the stage. I loved the boundless energy and unbridled talent of roaming violinist and vocalist Kate McWilliam as she visited her playing partners across the stage. The sight of another eclectic violinist let loose with a rock band would more than please any ELO fan who has had the pleasure of seeing Mik Kaminski in his prime. Once again the vocal work of Joy Strachan-Brain - fresh from the successful Made In Brum tour - coupled with her stage presence as leader of this particular gang again caught the eye and, of course, the ear! The real transformation in the band from their acoustic incarnation was evident when the vocal harmonies and individual instrumental talents of lead guitarist Paul Sargent and keyboardist Dave Bailey merged effortlessly as all four traded and/or shared vocals in tandem with the steady bass playing of: Christian Nokes and astute drumming of: Tim Tandler. Of special note were the two original Quill compositions on show entitled "Say It Ain’t So" and "England" [the latter from their new EP – see below] and both were sung beautifully.
Quill performed: "Duelling Banjos"; "Stuck In the Middle With You"; "Say It Ain't So"; "England"; "The Whole Of The Moon"; "Life In A Northern Town"; "Dreams"; "Dignity"; "Moonlight Shadow"; "Galway Girl"; "Raggle Taggle Gypsies"; "Toss The Feathers" 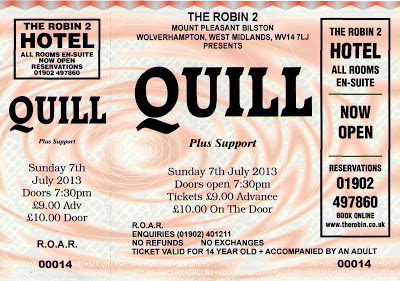 Quill have released eight albums at the time of writing [and other merchandise] as well as their marvellous new EP entitled "England" - which contains three excellent original tracks - penned by the much-missed late Ben Brain - including the patriotic and anthemic title track coupled with "Tumbling Years" and "Twister". The CD is available at gigs and from their bands official web site and/or you can buy the tracks in part [£0.69 each] or the whole EP [£2.07] as a download from amazon.co.uk thus: