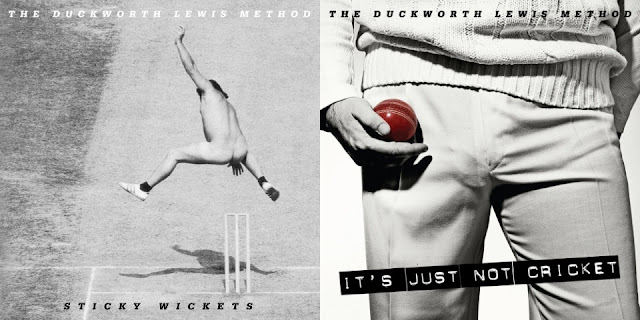 #537: Hello ... Hello ... my old friends ... It's great to see you once again! Our friends over at the superb A Short Site About The Divine Comedy have published the artwork and track listing for the much anticipated second Duckworth Lewis Method album "Sticky Wickets". The album will be released on both CD and LP format in the Republic of Ireland on Friday 28th June and in the UK on Monday 1st July via Divine Comedy Records.
The twelve trax are: "Sticky Wickets" ~ "Boom Boom Afridi" ~ "It’s Just Not Cricket" ~ "The Umpire" ~ "Third Man" ~ "Chin Music" ~ "Out In The Middle" ~ "Line And Length" ~ "The Laughing Cavaliers" ~ "Judd’s Paradox" ~ "Mystery Man" ~ "Nudging And Nurdling"

Dermot O'Leary played the lead single "It's Just Not Cricket" during his BBC Radio 2 show on Saturday 11th May and you can listen to it either on BBC iPlayer (from 2:36:10) or via Soundcloud. Please find these useful ordering links for both CD &/or LP formats thus:

The full article by A Short Site About The Divine Comedy, together with previous ELO Beatles Forever (ELOBF) posts regarding the new DLM album and live gigs, can be viewed thus: