#538: Hello ... Hello ... my old friends ... It's great to see you once again! The mark of a loved band is that their fans will go to extraordinary lengths to see them in live mode. One such fan was Makiko Ishikawa who recently travelled non-stop from Japan to see the mighty Pugwash live in Dublin - and then returned home the next day! Hence it was no problem for me to complete the return journey of a mere two hundred miles just to catch Thomas Walsh and the gang live at The Fleece & Firkin in Bristol supporting their pals Matt Berry & The Maypoles on their latest UK tour, promoting Matt's forthcoming album "Kill The Wolf".

And the trip was well worth it as Thomas, Tosh Flood, Shaun McGee and Joe Fitzgerald produced a stunning seven song set which included tracks from latest release "The Olympus Sound", one each from "Almanac", "Eleven Modern Antiquities" and "Jollity" as well as a superlative performance of a certain Duckworth Lewis Method classic.

Yours Truly KJS also had the pleasure of meeting the band both before and after their gig before having to return home in advance of the Matt Berry set. I was grateful to hear the sound check of the excellent encore performance by Matt and Thomas of "Live And Let Die" which later, by all accounts, absolutely rocked the venue! 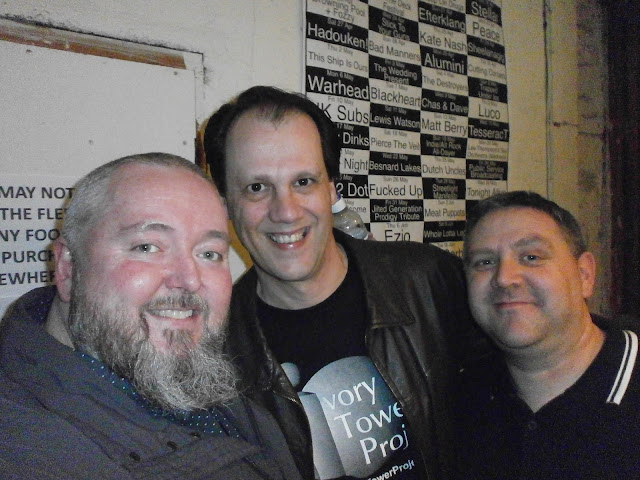 There is one other thing that must needs be said about this band. And that is that if ever you were looking for a worthy musical successor to the legacy of The Idle Race, The Move, Jeff Lynne, Roy Wood or ELO - then you need look no further than this band. This was my first Pugwash gig and I absolutely loved it! Whether with or without the programmed keyboards and strings, their live sound is music to the ears - literally! This band are not only a tight unit, they are visibly like family on stage and their vocal harmonies, led by the clear vocals of Thomas Walsh, are a delight. My thanks are again extended to the man who introduced me to this genial Irish quartet - Mark Burrows - who was my roving reporter for the first ELOBF Pugwash live review back in April 2012. There are four [4] more chances to catch the band on their UK tour at the time of writing thus:

Thomas will return with Neil Hannon and Tosh Flood in July for the release of the second Duckworth Lewis Method album "Sticky Wickets" and, at the time of writing, two DLM gigs at Nottingham Playhouse [July 9th] and the O2 Shepherd's Bush Empire [September 21st].

Most of the Pugwash album catalogue can be purchased via amazon.co.uk, 1969 Records [Ireland] or LoJinx [UK/Europe] thus: