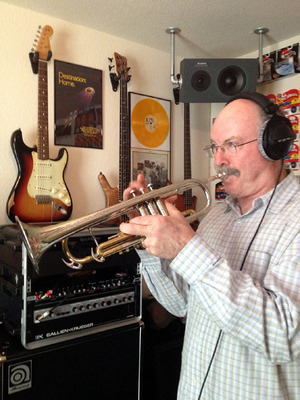 #525: Hello ... Hello ... my old friends ... It's great to see you once again! Yours Truly KJS and ELO Beatles Forever (ELOBF) are pleased to publish this long-in-the-works exclusive interview with Steve Howard - former member of Wings - fresh from his work with Michael Laine Hildebrandt, the man behind Bubble Gum Orchestra (BGO) - for this long-distance interview carried out in person on behalf of ELOBF by Michael himself in Texas a few short days ago:

ELOBF: My first question has to be how did you become involved with Michael on his song: “Blowin’ Away”?
SH: Michael and I have mutual friends here in the area where we both live. I met Michael several years ago and he had this song that he felt like the trumpet would be good on and he called me up and said “Would you like to come and play on it?” ... I said “Sure!” and we got together and did it.
ELOBF: What was it like working with Michael on BGO II?
SH: Well, it was real easy. Michael had clear ideas about what he wanted for the song and we got together in his studio and ran through the stuff a couple of times and started recording. He was real easy to work with and it was really a good project. I think it came out pretty well. 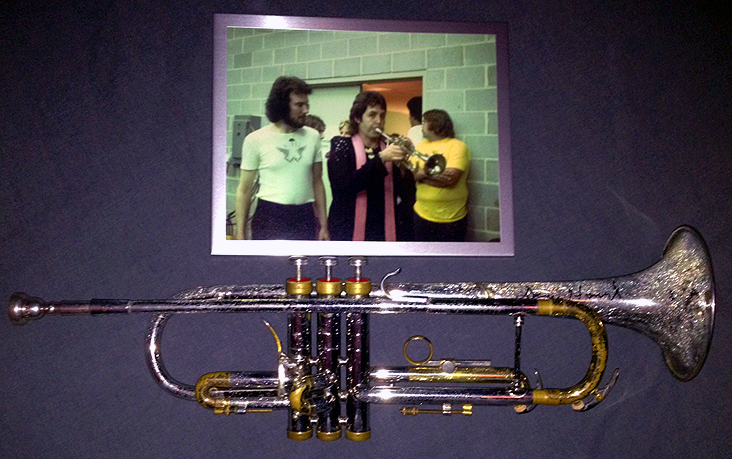 ELOBF: You played the very same trumpet that you played on all those tours with ‘Wings’ ... So what is the story behind that famed trumpet?
SH: Well that’s a real long story but I'll try to shorten it a bit! I started playing that horn back when I was a school at North Texas State University. I loved the way it played and the sound it had. Then I went to New Orleans, travelled down there and started playing for Allen Toussaint, record producer, and used that same horn to record on Patti LaBelle’s “Lady Marmalade” and Allen’s “Southern Nights” LP. It was also used on all the Wings stuff and then I also played it on a DVD of an Austin City Limits concert with Delbert McClinton. I used the horn all the time and I loved the horn except that the valves started kind of giving me some problems, so I went back to my old horn. My playing changed a bit when I went back to that original old horn, a Bach trumpet that I still play today. But I loved that old horn, it’s a great horn and we used it on Michael’s recording.
ELOBF: Tell me about your career before you worked with Paul McCartney and ‘Wings’?
SH: Well, I was a dish washer at a local restaurant! Well, no actually I did do some dish washing and cooking back when I was a kid but before Paul McCartney and Wings! I guess the thing that launched me into the gig with them was that I had moved to New Orleans and was working for Allen Toussaint, record producer. I was pretty much his first call trumpet player at Sea-Saint Studio in the early seventies and when Paul McCartney came to town to record: “Venus and Mars”, they called me in to play on part of the session. I met McCartney and his arranger and trombonist Tony Dorsey, with whom we did the tours together. Tony wanted to hire me to play with the band, so that was it. 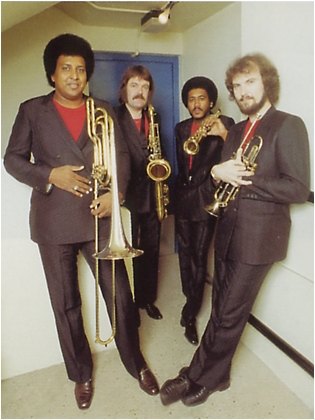 ELOBF: What did Steve Howard do after ‘Wings’? What other musicians and bands have you worked with in the three decades and more since?
SH: Well, I’ve worked with Michael Hildebrandt! And in addition to that, after Wings there was a period of time here I really didn’t play all that much but I did do some live recording and a DVD of Austin City Limits with Delbert McClinton. I’ve also worked with (and this isn’t concurrent time wise, it’s just that I’m reminiscing about the different people that I’ve played with) the blues guitar legend Albert Collins for three years before he died and I played on two or three records with him. And then I recorded a couple of albums with Edgar Winter, I went on and played with Ray Charles, I toured and did gigs with Boz Scaggs at the New Orleans Jazz and Heritage Festival. Then I moved in the early nineties back to New Orleans and I was working extensively for Black Top Records and I couldn’t even name all the artistes that I recorded for - but I recorded on a lot of blues albums for Black Top Records ... Clarence ‘Gatemouth’ Brown, Junior Wells (that featured Bonnie Raitt, Carlos Santana and a bunch of really cool people) and then I went to Germany and toured and recorded for four years with a German pop star named Peter Maffay. Currently, I’m the trumpet player for The Original Blues Brothers Band - that’s the guys who were in "The Blues Brothers" movie – the band members, but not Dan Ackroyd – Dan doesn’t come out and do the gigs anymore! But I play with them and we travel over to Europe and Asia, mostly in the summer, doing the festivals circuit and stuff like that. I also work locally in the Dallas and Fort Worth area just as a freelance musician and I have my own band called: The N’Awlins Gumbo Kings and if you want to find out about that, our web site is: www.gumbokings.com ... and Hey! We got CD’s for sale! 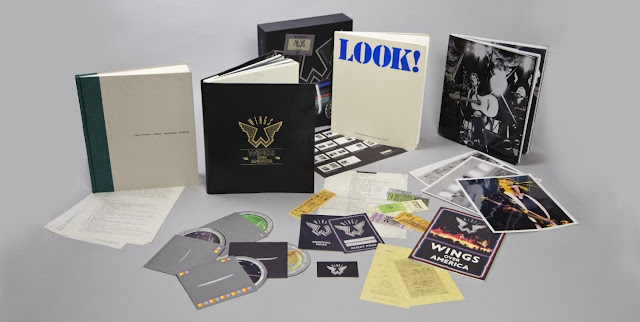 ELOBF: I understand that you are involved in the much anticipated re-release of the “Wings Over America” live album set. That must be pretty exciting to re-visit those days. Can you give us a hint about your input and what we should expect from the project? Do you have an estimate of the release date?
SH: I don’t have an estimate of the release date just yet but before I talk about that, let me back up to the last question, I left out one of the most important people that I worked for and have continued to have a friendship with and that is: Dr. John ‘Mac’ Rebennack from New Orleans, who has been in the Ringo Starr All Starr Band and the Rock ‘n’ Roll Hall Of Fame. Great guy! He actually performed a couple of tunes on our second CD "UFO Saloon" and you can, again, see about that on The Gumbo Kings website. But with regards to the “Wings Over America” LP, my involvement was that I got a 'phone call from the McCartney office, they said that they were going to re-release it and that they were going to put a booklet inside that was going to include interviews with all of the people that were involved in the project. And so David Fricke, who is Associate Editor of ‘Rolling Stone’ magazine, called me and we did a 'phone interview. I haven’t seen any of it yet, don’t really know anything about it really other than it is going to come out, there’s going to be a booklet, I’m going to be in it and I’m excited to kind of re-visit it! It’s very strange to look back and realise that it’s a piece of musical history and that I was a part of it! And it’s even stranger when I look at pictures of myself and I realise that I was a young man and now I’m an old man!

ELOBF: Please tell us about: The N'Awlins Gumbo Kings? What other projects is Steve Howard involved in, here and now in Yours Truly 2013? Will you work with BGO again on the future?
SH: Now I’ve already mentioned something about The Gumbo Kings ... we’re a group of guys who live in the Dallas and Fort Worth area, who are either from New Orleans or have spent time in New Orleans, playing – more or less – music that is based in traditional New Orleans style, an example being Dixieland, New Orleans funk music and second line brass band sounding stuff. It’s instrumentation is a horn section which is a clarinet tenor guy, me on trumpet and a trombonist and then a rhythm section – piano, bass and drums. Our drummer is from New Orleans, plays the authentic second line beat and we have quite a bit of original stuff on our records too so it’s not just Dixieland – a lot of people get us confused because we can play one song that sounds like pure Dixieland and then we can play another song that sounds like a pop funk thing or something so it’s kind of a hybrid, as I call it, but it’s all with a New Orleans flavour. You can check us out on YouTube and you can check us out at our web site, where there is a YouTube link as well. I have also assumed the role of the trumpet player with The Original Blues Brothers Band. I’m going to be in Europe in 2013, I’ll actually be in London on 29th June playing a concert. I can’t tell you where it’s going to be yet but we will be doing a concert in London in June and I am the new trumpet player with The Blues Brothers Band with the sax player Blue Lou Marini, who was in the movie, is an old friend of mine from North Texas State University. And when the original trumpeter Alan Rubin, who was an unbelievable musician and a great trumpet player, became ill, I started filling in for him and, about a year and a half ago, he died so they called me to go ahead and take his place so I’ve been doing that for a while. So, I'm working with them; The Gumbo Kings and, Yes, I am doing another project with Michael! He’s currently talking with me and we’re getting ready to do another recording and put some trumpet on the next Bubble Gum Orchestra project in 2013!
ELOBF: Now finally, here is the question that I always ask next when interviewing for ELOBF: What are your personal favourite ELO, Paul McCartney and Beatles tracks, and why?
SH: Well, I didn’t really listen back then to ELO so I don’t really have a personal favourite. I thought that they were a good band but I wasn’t really into them, being a horn player. But I did like “Boy Blue” a lot ... especially that intro! I was more into bands that had a lot of horns and stuff. So, as far as The Beatles go, I always enjoyed the songs with brass in them. I liked “Got To Get You Into My Life” and “Penny Lane” was exceptional. I don’t know who played the piccolo trumpet on that song but it was absolutely one of my favourites. Back in the Wings days, I spoke to Paul about doing that song live. I do remember telling Paul that if we were going to do it, I would need quite a bit of time to rehearse. I would have had to get a Piccolo trumpet and learn all those very intricate parts. But as it turns out, of course, that song never materialised into our live set. It’s a classic of course as all The Beatles stuff is and as for the Paul McCartney stuff goes, in my opinion Paul wrote some really good songs and he’s like all great songwriters in that even the really great songwriters don’t always write songs that are just ‘the best’. But he had a lot of good songs and I guess the ones which involved the brass were the ones that I liked best.

I would like to extend my personal appreciation and thanks to both Steve Howard and Michael Laine Hildebrandt for participating in this interview for ELO Beatles Forever (ELOBF).