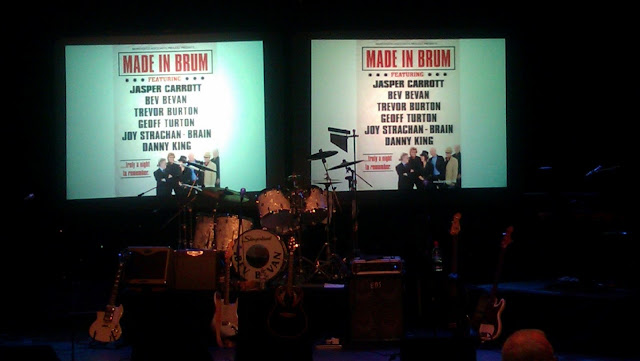 #529: Hello ... Hello ... my old friends ... It's great to see you once again! It was a last minute decision to drive the short drive over to Lichfield on the evening of Wednesday 17th April to take an early look at the much anticipated Made In Brum show - featuring Jasper Carrott, Bev Bevan, Trevor Burton, Joy Strachan-Brain, Danny King, Geoff Turton, Tony Kelsey, Phil Tree and Abby Brant - early in their Midlands theatre tour. From the opening notes of the opening Midlands music medley through to the all ensembled encore of "Blackberry Way", this wonderful new production turned out to not only be a select few of Brummie superstars gracing the stage with their interpretations of the musical output of the 'Second City' but it was also their tribute to those Rock 'n' Roll, Blues and soul icons we all know and love from the 'Swinging Sixties' onwards. 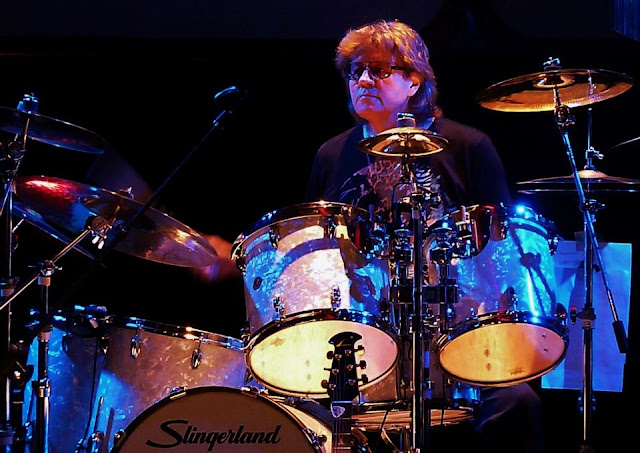 The music was ably supported by the genial comedy of the legendary Jasper Carrott, who had the audience eating out of his hand on not a few occasions with jokes such as "I went to Moseley Mixed school ... I knew it was bad because it had its own mortuary!" as well as taking lead vocals on "All Around My Hat". The percussion of Bev Bevan was, as ever, the heartbeat of the gig. It really was great to see and hear Bev playing an ELO song live for the first time since 1999 and he was in his element with Move mate Trevor Burton's rasping vocals for "Something Else" and "I Can Hear The Grass Grow" contrasted later on in the set by his superb rendition of "Drift Away".

Rockin' Berry Geoff Turton's wit and sheer showmanship meant that his performance of "Pretty Woman", backed by projected screen images of the late, great Roy Orbison, brought this writer to tears, as did his version of "Claudette". The surprise packet, of the night, for me, was Joy Strachan-Brain (Quill) who, with her effervescent stage presence and marvellous vocal range, was able to sing effortlessly in the style of Tina Turner and Dusty Springfield in consecutive songs.

And what can we say of the loveable Danny King? Only to say that he added his enigmatic royal vocals to "Save The Last Dance For Me" and was to provide the most moving moment of the night when, while the projected faces of Midlands musical heroes now departed graced the screen at the rear of the stage, he sang "My Prayer" from the wings. Indeed, at least two lumps in the throat occurred when the photographs of Carl Wayne and Kelly Groucutt were displayed. Truly moving indeed.

It should also be noted that The Bev Bevan Band were (again) superb with the clear vocals and sublime bass of Phil Tree in combination with the wonderful, bright and very talented newcomer, the awesome Abby Brant on keyboards. Last (but definitely not least) was Musical Director Tony Kelsey, who like any top notch arranger, not only pulled all the strands together in the many pre-tour rehearsals but also provided some awesome guitar work in support of all the artistes on show.

Act I: Overture (Peter Gunn/Apache/Keep On Running/Daytripper/Purple Haze/I'm A Man/Paranoid/Whole Lotta Love) ~ Gimme Some Lovin' ~ Something Else ~ I Can Hear The Grass Grow ~ Move It ~ True Love Ways ~ Claudette ~ You’ve Got Your Troubles ~ Pretty Woman ~ Nut Bush City Limits ~ Going Back ~ I Heard It Through The Grapevine ~ It Takes Two ~ Dancing In The Street. Act II: Mystery Train ~ You’ve Lost That Loving Feeling ~ Will You Still Love Me Tomorrow? ~ Hold Me ~ Nights In White Satin ~ All Around My Hat ~ Surrender ~ Save The Last Dance For Me ~ My Prayer ~ Wild Thing ~ Drift Away ~ Hey Joe ~ Don’t Bring Me Down ~ Blackberry Way

Please note that some of the above photographs were expertly taken by and are courtesy of Sir Jeff Cooper. At the time of writing, there are still twelve shows remaining so there is still a reasonable chance that you may be able to purchase tickets thus:

ELO Beatles Forever (ELOBF) recommends "Made In Brum" to those enlightened folks who enjoy the music of ELO/Jeff Lynne, Roy Wood, The Move, 'Brum Beat', The Beatles and related artistes.