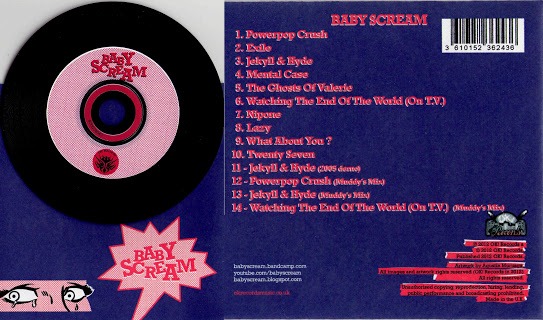 #519: Hello ... Hello ... my old friends ... It's great to see you once again! Earlier this year in January, ELOBF introduced you to Baby Scream - the musical progeny of Juan Pablo Mazzola. Earlier this week, Yours Truly KJS was pleased and pleasantly surprised to receive a copy of his self-titled album "Baby Scream" in its expanded format just in time for the official release date of Tuesday 2nd April. As mentioned previously here, Juan told me that he was "a huge ELO/Beatles fan, and what (he does) is basically classic power pop!". And a few listens to this expanded version of "Baby Scream" does bare this out. I guess the best way to sum up this enjoyable album is to ask the question: "What 'Do Ya' get if you cross T Rex with David Bowie and throw in a little Tom Petty?" The answer is, of course, Baby Scream!

There are also some fine ELO and Beatles (specifically John Lennon) influences here too but this release predominantly oozes Marc Bolan above all, particularly with "Lazy" and "Twenty Seven". "What About You?" is very definitely inspired by Tom Petty and my personal fave track "Jekyll & Hyde" is most surely Bowiesque. The oriental "Nipone" is also of note with "Exile" reminding the listener of both Beatles and ELO inspired song construction and vocal harmonies. "Baby Scream" is one of the most varied yet balanced set of songs that I've listened to in quite a long time. This reissue of the 2010 album includes the original ten trax plus an additional four bonus tracks that include three alternate mixes and a demo from 2005. The album is released via OK! Records (an independent label based in Oldbury) and will be available either via most digital download sites as of the official release date thus: