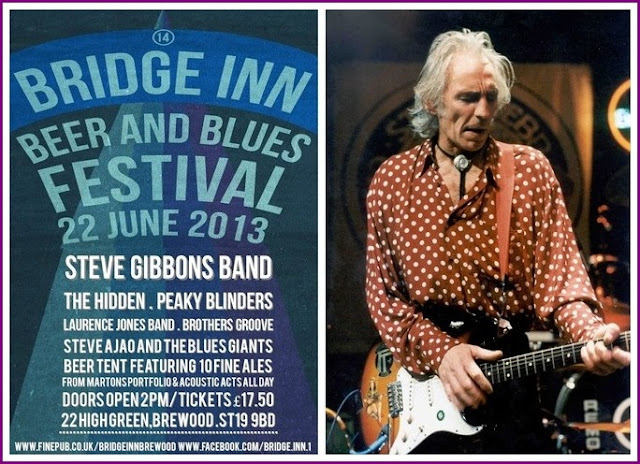 #514: Hello ... Hello ... my old friends ... It's great to see you once again! You may recall that ELO Beatles Forever (ELOBF) covered the local Brewood Music Festival last year, which featured The Move and many other fine artistes. We can now look forward this Summer to The Bridge Inn Beer & Blues Festival - to be held once again in Brewood - on Saturday 22nd June.

Yours Truly KJS recommends this great local festival is because it is being headlined by the elder statesman of 'Brum Beat' who is Steve Gibbons - and, of course, his band - whose career resume reads like a who's who of the Birmingham music scene in the Sixties with spells in The Uglys (who also included Dave Morgan, Richard Tandy and Keith Smart at various times), Balls (with Trevor Burton, Mike Kellie, Keith Smart and Denny Laine) and The Idle Race (post Jeff Lynne) before it morphed into The Steve Gibbons Band.

He went on to achieve a Top 20 hit single in 1977 with "Tulane" (UK: #12) and continues to successfully tour to the present day. Steve Gibbons will be supported by a plethora of talented local acts (and beers) on the day, as can be evidenced by the above poster. Tickets  can be purchased from Monday 25th March either in person &/or by contacting The Bridge Inn on (01902) 851999 &/or by emailing bridgeinnbrewood@gmail.com &/or via these links thus: