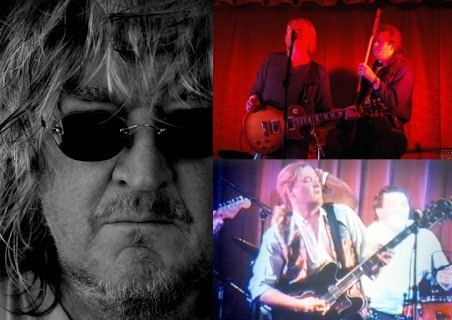 #501: Hello ... Hello ... my old friends ... It's great to see you once again! This is an interview long in the making! Back in the early days of ELOBF in June 2009, shortly after the death of the late, great Kelly Groucutt, Yours Truly KJS posted this article about the role of Kelly in his 'other' band: Session 60 thus:
Recommended: 60's Sessions (Session 60)

At about that time, Bryan Gibson contacted me and mentioned his involvement with Session 60 and how sad he was that the group had disbanded. I wanted to find out more about Session 60, those links with the much-missed ELO musician and the Midlands music scene in general so I put together an interview with Bryan about his career and that of Session 60. Henceforth, and amazingly so, nearly four years later, both Bryan and I have managed to complete that interview! What follows is an interesting dialogue that not only strengthens those links between Session 60 and ELO, but also delves into the 'Brum Beat' scene and highlights the colourful musical career of one Bryan Gibson.

We played lots of gigs round Birmingham, a couple of festivals and developed a bit of a following. We eventually settled with a steady drummer named Stuart Wilson. He was (and probably still is) Glenn Hughes' cousin and had been in early Trapeze with Glenn. He went on to be a session drummer in the 1970’s, playing on stuff by The Knack and others. Most recently he received the call to Abbey Road to play on the new Pixie Lott album. After The Fridge Magnets fizzled out I met a lunatic called Tony Mottram. Tony is a well known Rock ’n’ Roll photographer. He has worked with everyone, done album covers, and toured the world as official camera jockey with Aerosmith, The Clash, Eric Clapton ...you name ‘em ... he’s done ‘em. Anyway, Tony plays bass, and wherever he has lived he has had a Blues band called 58 Deluxe.
Before I knew it, I was signed up and then followed seven years gigging all round the country and having a ball. The line-up was me (guitar/vocals), Tony Mottram (Bass), Mario Blowman (Drums) and Tony Stokes (Harmonica). It was the most fun I’ve ever had in a band and we developed a strong following. I stayed with them until 2010 when I suddenly decided to up sticks and move to The Outer Hebrides.
KJS: Although you never crossed paths with Kelly in the band, did you ever meet him or any of the ELO and related musical family in any other capacity?
BG: Kelly and other ELO folk used to turn up at Session 60 gigs now and then and were always great fun. I can’t say I knew him well, but it was always good to see him and he would hang out after the gig. I’m glad to have known him, if only slightly. We worked with The Rockin’ Berries a lot and in the afternoon, after the sound check, Keith Smart was always up for a jam and we would play all kinds of stuff! I always enjoyed that.
KJS: Your musical influences are?
BG: First influence: Focus. It was listening to "Sylvia" on Radio Luxembourg under the bedclothes that made me want to learn to play guitar. Thereafter, all the major guitar players, Page, Gilmour ... but once I came across Rory Gallagher, that was it!
KJS: Your most memorable moment with Session 60?
BG: Loads! Meeting, and playing huge gigs with the likes of Gerry Marsden. The Sixties themed weekends at Butlins in Llandudno where we would do all the support spots: Freddie and the Dreamers, The Real Thing ... loads of them! We did it for years. And then there was Paul falling asleep at the wheel of the van on the M1 and veering across the carriageway because he dreamed he’d seen a battleship crossing the road ahead of us!
KJS: And what is Bryan Gibson up to these days?
BG: I’ve just left the Hebrides and moved back to Oban on the mainland. I have met a few Blues players and am hoping to get something together. However, in October last year, I fell and badly broke my right hand. It has not healed well and I find playing difficult now. Certainly my finger-picking has suffered as two of my fingers are slightly twisted and no longer where I think they are. So if I try to play an acoustic piece like "Anji", half the notes are missing. It’s going to take some re-learning. Using a pick is not too bad, but my hand and wrist are very stiff. I shall persevere though!
KJS: Finally a question that I always ask ... your favourite ELO song is?
BG: Well, the first ELO single I ever heard was "Roll Over Beethoven" - which I rushed out and bought, but that's not one of theirs really. So, I’ll have to go with ... "Mr. Blue Sky". I love the arrangement! Hope this is all OK and that you managed to stay awake, Keith!

I hope you enjoy reading this interview as much as I did writing it up! ELO Beatles Forever wishes to extend many thanx to Bryan Gibson for his participation in this interview and looks forward to informing visitors to KJS/ELOBF about his next musical projects in the near future.