Recommended: Off The Ground 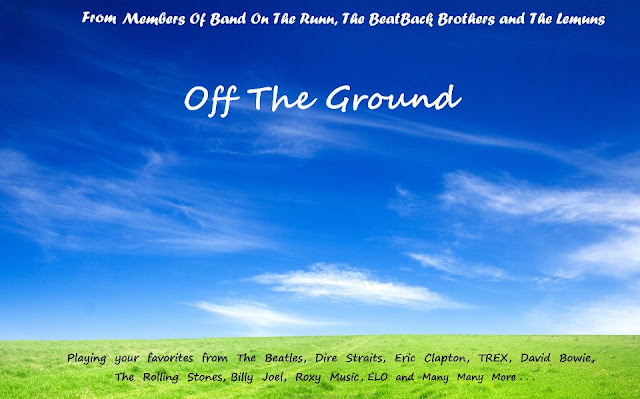 #487: Hello ... Hello ... my old friends ... It's great to see you once again! Two weeks ago, Yours Truly KJS was lamenting the passing of Band On The Runn. But, earlier this week, ELO Beatles Forever (ELOBF) was delighted to hear the news that Craig Whale, Adam Willetts and Ian Hammond are launching a new Midlands based project entitled Off The Ground from the ashes of Band On The Runn.
In their own words: "Craig, Ian and 'The Black Country Billy Joel' a.k.a. Adam Willetts are to join forces once again. This time not to pay tribute to one artist, but to many. Entitled 'Off The Ground', we will be performing a mix of classic songs from the 60's, 70's and 80's mainly and maybe even incorporating our take on a couple of modern numbers! To name a few, The Beatles, David Bowie, Dire Straits, Eric Clapton, T.Rex, ELO, The Rolling Stones, Roxy Music, Billy Joel and many more (obviously) will be covered. Hopefully, there will be a bit of something in there for everyone. The line-up will consist of Wix Willetts on keyboards and backing vocals, Craig Whale on drums and backing/lead vocals with Ian 'B3' Hammond the front man on guitar and lead vocals. We already have a few bookings that we will confirm shortly to you and we all look forward to welcoming you to a show in the near future!"

A new website and confirmed gig dates will be announced in the near future. I spoke to Craig earlier this week and is very excited about the new band and the fact that they will be covering "Rock 'n' Roll Is King" and "Evil Woman" in their set list. Craig, Adam and Ian will also be continuing with their The BeatBack Brothers and The Lemuns projects respectively.
ELO Beatles Forever (ELOBF) recommends Off The Ground to those enlightened folks who also like ELO/Jeff Lynne, Roy Wood, The Move, 'Brum Beat', The Beatles and related artistes.
Until next "Time" in the ELO (and related) Universe ... KJS ... 28-Jan-2013
Posted by Keith J Sinclair at 21:41