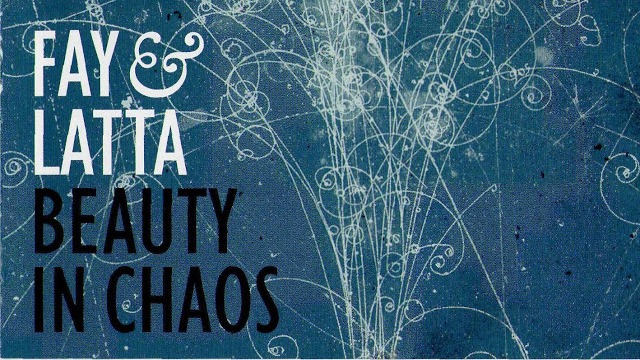 #470: Hello ... Hello ... my old friends ... It's great to see you once again! Back in May 2011, Yours Truly KJS reviewed "The View From Here", the excellent debut album by Fay & Latta for ELOBF. This talented acoustic duo, who are based in West Yorkshire, have just released their second album entitled "Beauty In Chaos" and it is of special interest to avid ELO fans as it also features virtuoso violinist Mik Kaminski (ELO/Violinski/OrKestra/ELO Part II/BBBV and The Orchestra) on five of the tracks.

In some ways "Beauty In Chaos" carries on where "The View From Here" left off - but that is half of the story. The addition of the sublime strings of Mik Kaminski brings a new edge to the five tracks "Sweet Surrender", "Don't Block Me Out", "Hold On", "Inside Out" and the title track "Beauty In Chaos" with which he assists Anneka Fay (formerly Latta) on Vocals/Piano/Whistles and Tom Fay (Acoustic/Electric Guitars). Yet, having listened not a few times to this classy and atmospheric release for the last few days, one cannot fail to be impressed by the whole set of  predominantly acoustic songs supplanted by keyboards and, of course, a certain Blue Violin - but captained by the beautiful, clear voice of Anneka (which reminds me very much of Bailey Tzuke) and those thoughtful, pensive lyrics written by the duo.

Personal faves at the time of writing are "Sweet Surrender", the soaring, moody instrumental "The Little Things That Count", the beautiful "Because Of You" and the grateful "Lucky One" - not forgetting the enigmatic title track, if not ELOesque, "Hold On". (9/10)

This is a really nice thirteen song package which is more than well worth the £6 (plus P+P) outlay. Speaking of which, you can now order "Beauty In Chaos" &/or "The View From Here" from the Fay & Latta official web site thus:

ELO Beatles Forever (ELOBF) recommends "Beauty In Chaos" by Fay & Latta to those enlightened folks who enjoy the music of ELO/Jeff Lynne, Roy Wood, The Move, The Idle Race, 'Brum Beat', The Beatles and related artistes. Go see 'em live - especially if you happen to live in the vicinity of Yorkshire!