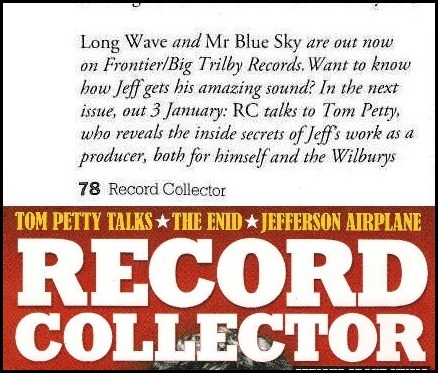 #463: Hello ... Hello ... my old friends ... It's great to see you once again! The fantastic latest ELO themed edition (#409) of Record Collector magazine has just been published here in the UK with not only extensive, consecutive interviews with both Jeff Lynne and Bev Bevan (pages 70-82) but also a nice review of The Move: The Lost Broadcasts (page 104).

But hidden away right at the end of the Jeff Lynne article entitled "Blue Sky Thinking" on page 78 is a teaser for the next issue (see above image), which is due for release on Thursday 3rd January. Issue #410 will feature Tom Petty, Jeff (again!) and The Traveling Wilburys and looks like another 'must buy' for the New Year thus:

"In the next issue, out on 3 January: RC talks to Tom Petty, who reveals the inside secrets of Jeff's work as a producer, both for himself and the Wilburys"