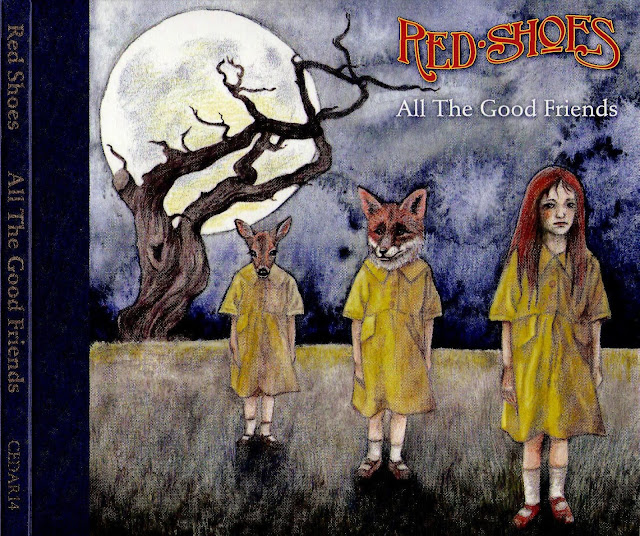 #460: Hello ... Hello ... my old friends ... It's great to see you once again! I first heard about Red Shoes while I was chatting away with Christian Evans and Move guitarist Tony Kelsey at the Brewood Music Festival back in July 2012. Tony mentioned to me that he was a member of Red Shoes and that pledging was ongoing towards the release of the follow-up release to their 2010 release "Ring Around The Land" (#CEDAR13).

Their new album, entitled "All The Good Friends", has just been released on Cedarwood Records (#CEDAR14) and there are many good reasons why fans in the ELOBF universe should take an interest in this latest volume, besides the fact that there is a new take on that Roy Wood penned Move classic "Blackberry Way" included within. The core foursome of Mark and Carolyn Evans, Bert Priest and Tony Kelsey were joined by, amongst others, Bev Bevan (The Move/ELO), Bill Hunt (ELO/Wizzard), Julian Crook (The Cohen Brothers) and Brian Badhams (Wheels of Fire) during the recording sessions as well as Dave Pegg, Chris Leslie and Dave Swarbrick (Fairport Convention) and respected producer Mick Dolan.

This delectable record, with Carolyn predominantly on lead vocals, includes great songs such as "Red Coat Ride" (featuring one Bev Bevan on drums and Bill Hunt on French Horn), a violin and mandolin flavoured call to arms against the hunting brigade, complete with a hook reminiscent of "Brontosaurus", "The Well" – a gritty electric guitar driven composition, "Hidden Name" is an ode to motherly love with a beautiful bamboo whistle solo, "If This Is Life" features Mark on lead vocals and is almost a protest song, "Blackberry Way" is given a whole new twist as a sultry folk song with Bev 'Bullfrog' Bevan also appearing here on backing vocals, "River Rea" is simply beautiful, "Swansong" is a catchy, multi-vocal folk foot stomper that either Steeleye Span or Fairport Convention would be proud of and "The Last Dance" is a lovely tune reminiscent of those days when a girl impatiently waited for that special question at the local dance. "All The Good Friends" oozes maturity in terms of the introspective lyrics that often look back to days gone by, sometimes with regret and sometimes with a knowing smile. To this listener and writer, it has a familiar feel to it and is a recording that warms the heart yet pleases the ear. (9/10)

"All The Good Friends" is available from the shop at the Official Red Shoes web site thus:

ELO Beatles Forever (ELOBF) recommends "All The Good Friends" by Red Shoes to those enlightened folks who enjoy the music of ELO/Jeff Lynne, Roy Wood, The Move, The Idle Race, 'Brum Beat', The Beatles and related artistes.