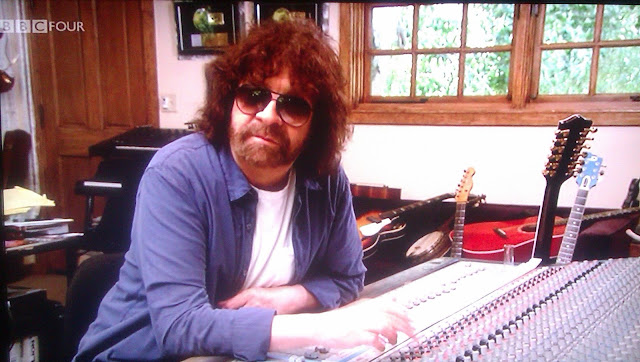 #417: Hello ... Hello ... my old friends ... It's great to see you once again! If I were absolutely honest, I would say that "Mr. Blue Sky: The Story of Jeff Lynne and ELO" contained precious little of ELO  per se. This is not a criticism, just an observation. But what this excellent documentary did contain was indeed the whole story of the man Jeff Lynne practically to birth to here in Yours Truly 2012 - and a whole lot more!

We were treated to the inside view of the studio, which doubles as his LA home, in quite some detail. With contributions from Olivia & Dhani Harrison, Paul McCartney, Tom Petty, Joe Walsh, Fred the Robot, Barbara Orbison, Eric Idle, Richard Tandy, Ringo Starr as well as rare home movie footage of George Harrison, Del Shannon, The Beatles and The Traveling Wilburys and a superb tribute to the much loved Roy Orbison, the film clearly demonstrated the reputation, work ethic and even sense of humour of Mr. Lynne.

For a musician, songwriter, producer and arranger to have not only worked with but with his peers and also his musical heroes, it speaks volumes for someone who seems happier locked away in his home/studio rather than on stage or the TV show couch.

Whilst the film was missing most of the ELO story (and any other former members) in and of itself, it must rank as the best ELO (and related) documentary/film ever - with significant interest for Beatles fans too - and well worth that impatient wait for the formal DVD release. (10/10)