JETDP402: The Secrets of Secret Messages 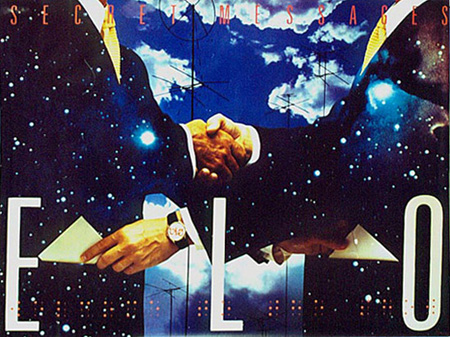 #434: Hello ... Hello ... my old friends ... It's great to see you once again! You may recall that I posted this article last week about the fact that: Sony Legacy Recordings have an active Music Reissue web page up and running for the growing campaign to have that enigmatic 1983 ELO album "Secret Messages" released in its eighteen (18) track glory, complete with "Beatles Forever":

One of the voters on the above web page - Alan Kelly - has posted this excellent and expansive overview of the "Secret Messages" story with interesting new information, at least to this writer:

"A while back, ELO's official archivist Rob Caiger revealed on the band's own Face The Music website that Jeff Lynne had finally given his support for the release of "Secret Messages" in its original double album configuration after years of resisting such an idea (he supposedly had issues with the mythical "Beatles Forever" in particular, but it seems he may have been persuaded in the end). If my understanding is correct, Caiger even pitched a proposal to Sony for a 2CD 'Deluxe Edition' on the Legacy imprint, with the first disc to contain all 18 songs in their unaltered April 1983 acetate form. The second disc would have featured the reduced 11-track version that eventually saw the light of day in June the same year, plus a selection of out-takes, early mixes and alternate takes from the period.

According to Lynne's own liner notes in the "Flashback" compilation from 2000, "Helpless" and "Tears In Your Life" also dated from these sessions, the latter once based around a vocoder part rather than multi-part harmonised vocals as heard in the released version. Ideally, I'd love to hear these demos as well. Also, it is known that Grieg's "Piano Concerto In A Minor" and "Who's That?" started off as '82 era studio sound checks. Again, the incomplete recordings of these would be fascinating to have.

Along with all of these potential bonus tracks, I'd be interested to see if we can have at least a few highlights from "The Garden Rehearsals" - a tape reported to still exist in the vault of the touring group running through many of Jeff's latest compositions, which was probably captured during the previous "Time" tour before sessions for the next album started properly at Wisseloord Studios. In addition to all of this, I hope for a 30th Anniversary release to have a recreation of "Motor Factory". For those who don't already know the history behind this one, it was an early lyric idea wiped in favour of what later became "Rock 'n' Roll Is King". A song about the Austin car factory at Longbridge, you can still hear a distinctive metallic sound designed to emulate an industrial lathe in the final version's percussion.

Unfortunately, due to the way Jeff reworked this track, he would either have to recreate the vocals or source a safety copy, assuming he made any in the first place! On that subject, if possible it would be great if he was given the opportunity to reconstruct the whole album using its digital masters. Since he didn't have the time to familiarise himself with this relatively new technology back in the day, the '83 release was assembled from analogue backups instead.

Perhaps the most important detail of all regarding this project would be ensuring the end result is faithful to Jeff's original vision. Engineer Bill Bottrell has confirmed in the past that he continues to own a tape dub of the full album, and a set of acetates was sold a few years ago. Perhaps these could be sourced to ensure authenticity? "After All" should be the 41-second version, and "Hello My Old Friend" desperately needs its cacophonic ending restoring.

Additionally, the cover artwork for this package would need to be accurate as well. Unlike the final version, "Secret Messages" in its rejected (double album) form was to use a completely different design that only surfaced in the form of a rare promotional poster (Ed: See above). In fact, the "Balance Of Power" out take "In For The Kill" even references this unused sleeve with the lyric "someone holds a document and smiles as they shake hands"

Finally, there should be a wealth of text detailing the lengthy background of this album's creation and subsequent status in the ELO canon. I may be jumping the gun here, but I suspect Rob Caiger has been waiting a long time to write the liner notes for this one. Actually, I reckon he's already done most of the necessary research and could provide some great pictures. Apart from being the band's intended swansong, there should also be a mention of the planned serial number for this record: JETDP402.

To summarise, with the 40th Anniversary currently being celebrated through several hugely successful albums and Lynne preparing multiple further titles for next year, the time is right for all of "Secret Messages" to be revealed. Would it be too much to ask for a guide documenting every backwards sample hidden away on this album at long last as well, plus exactly where each can be found?"

As I read and re-read Alan's summary, Yours Truly KJS has to say that my enthusiasm to continue with the original goal of ELO Beatles Forever (ELOBF) and help, in some small way, towards it being released - officially - as it was intended nearly three decades ago, has been reinforced!