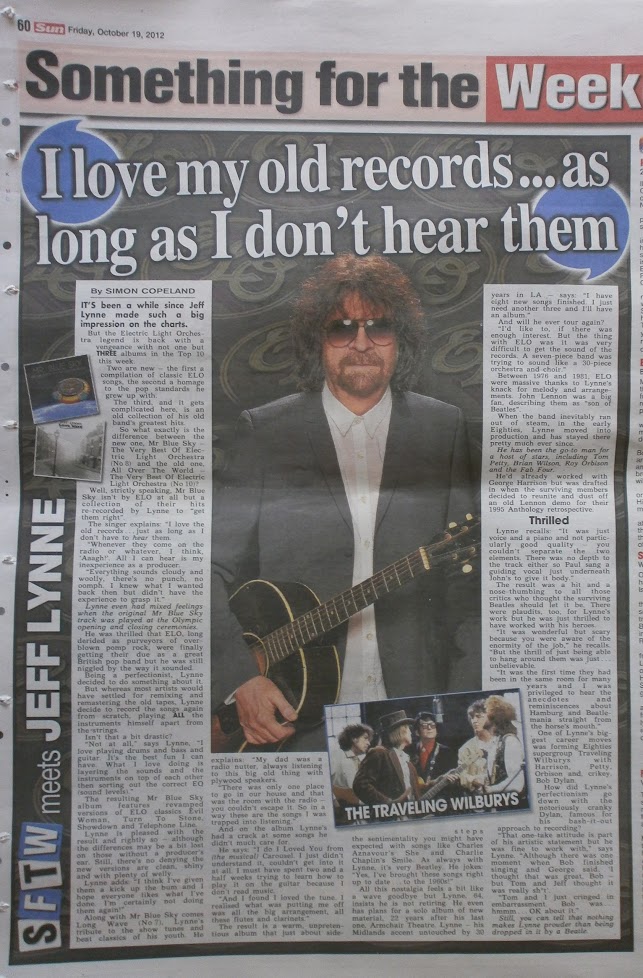 #432: Hello ... Hello ... my old friends ... It's great to see you once again! This interesting and incisive interview, transcripted below from the above cutting, was first published today in The Sun newspaper (page #60) on Friday 19th October and was written by Simon Copeland:

"It’s been a while since Jeff Lynne made such a big impression on the charts. But the Electric Light Orchestra legend is back with a vengeance with not one but THREE albums in the Top 10 this week. Two are new – the first a compilation of classic ELO songs, the second a homage to the pop standards he grew up with. The third, and it gets complicated here, is an old collection of his old band’s greatest hits. So what exactly is the difference between the new one, “Mr. Blue Sky – The Very Best Of Electric Light Orchestra” (No. 8) and  the old one, “All Over The World – The Very Best Of Electric Light Orchestra” (No. 10)? Well, strictly speaking, “Mr. Blue Sky” isn’t ELO at all but a collection of their hits re-recorded by Lynne to “... get them right”.

The singer explains: “I love the old records ... just as long as I don’t have to hear them. Whenever they come on the radio or whatever, I think, “Aaagh!”. All I can hear is my inexperience as a producer. Everything sounds cloudy and woolly, there’s no punch, no oomph. I knew what I wanted back then but didn’t have the experience to grasp it.”

Lynne even had mixed feelings when the original “Mr. Blue Sky” track was played at the Olympic opening and closing ceremonies. He was thrilled that ELO, long derided as purveyors of overblown pomp rock, were finally getting their due as a great British pop band but he was still niggled by the way it sounded.

Being a perfectionist, Lynne decided to do something about it. But whereas most artists would have settled for remixing and re-mastering the old tapes, Lynne decided to record the songs again from scratch, playing ALL the instruments himself apart from the strings. Isn’t that a bit drastic?

“Not at all,” says Lynne, “I love playing drums and bass and guitar. It’s the best fun I can have. What I love doing is layering the sounds and the instruments on top of each other then sorting out the correct EQ (sound levels).”

The resulting “Mr. Blue Sky” album features revamped versions of ELO classics “Evil Woman”, “Turn To Stone”, “Showdown” and “Telephone Line”. Lynne is pleased with the result and rightly so – although the differences may be a bit lost on those without a producer’s ear. Still, there’s no denying the new versions are clean, shiny and with plenty of welly.
Lynne adds: “I think I’ve given them a kick up the bum and I hope everyone else likes what I’ve done. I’m certainly not doing them again!”

Along with “Mr. Blue Sky” comes “Long Wave” (No. 7), Lynne’s tribute to the show tunes and beat classics of his youth. He explains: “My dad was a radio nutter, always listening to this big old thing with plywood speakers. There was only one place to go in our house and that was the room with the radio – you couldn’t escape it. So in a way these are the songs I was trapped into listening.”

And on the album Lynne has had a crack at some songs he didn’t much care for.
He says: “I do “If I Loved You” from (the musical) “Carousel”. I just didn’t understand it, couldn’t get into it at all. I must have spent two and a half weeks trying to learn how to play it on the guitar because I don’t read music. And I found I loved the tune. I realised what was putting me off was all the big arrangement, all these flutes and clarinets.”

The result is a warm, unpretentious album that just about side steps the sentimentality you might have expected with songs like Charles Aznavour’s “She” and Charlie Chaplin’s “Smile”. As always with Lynne, it’s very Beatley. He jokes: “Yes, I’ve brought these songs right up to date ... to the 1960’s!”

All this nostalgia feels a bit like a wave goodbye but Lynne, 64, insists he is not retiring. He even has plans for a solo album of new material, 22 years after his last one, “Armchair Theatre”. Lynne – his Midlands accent untouched by 30 years in LA – says: “I have eight new songs finished. I just need another three and I’ll have an album.”

And will he ever tour again? “I’d like to, if there was enough interest. But the thing with ELO was it was very difficult to get the sound of the records. A seven-piece band was trying to sound like a 30-piece orchestra and choir.”

Between 1976 and 1981, ELO were massive thanks to Lynne’s knack for melody and arrangements. John Lennon was a big fan, describing them as “... son of Beatles”. When the band inevitably ran out of steam, in the early Eighties, Lynne moved into production and has stayed there pretty much ever since. He has been the go-to man for a host of stars including Tom Petty, Brian Wilson, Roy Orbison and the Fab Four. He’d already worked with George Harrison but was drafted in when the surviving members decided to reunite and dust off an old Lennon demo for their 1995 “Anthology” retrospective.

Lynne recalls: “It was just voice and a piano and not particularly good quality – you couldn’t separate the two elements. There was no depth to the track either so Paul sang a guiding vocal just underneath John’s to give it body.”

The result was a hit and a nose-thumbing to all those critics who thought the surviving Beatles should “Let It Be”. There were plaudits, too, for Lynne’s work but he was just thrilled to have worked with his heroes.

“It was wonderful but scary because you were aware of the enormity of the job.” he recalls. “But the thrill of just being able to hang around them was just ... unbelievable. It was the first time they had been in the same room for many years and I was privileged to hear the anecdotes and reminiscences about Hamburg and Beatlemania straight from the horse’s mouth.”

One of Lynne’s biggest career moves was forming Eighties supergroup (The) Traveling Wilburys with Harrison, Petty, Orbison and, crikey, Bob Dylan! How did Lynne’s perfectionism go down with the notoriously cranky Dylan, famous for his bash-it-out approach to recording?

“That one-take attitude is part of his artistic statement but he was fine to work with,” says Lynne. “Although there was one moment when Bob finished singing and George said, “I thought that was great, Bob – but Tom and Jeff thought it was really sh*t. Tom and I just cringed in embarrassment. Bob was ... Hmmm ... OK about it.”

Still, you can tell that nothing makes Lynne prouder than being dropped in it by a Beatle.”