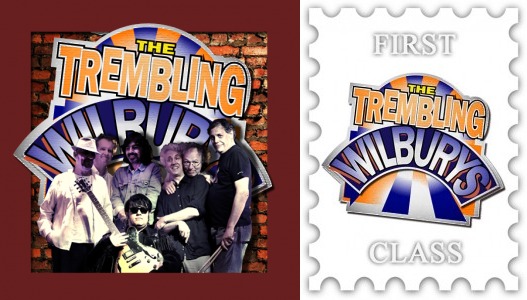 #440: Hello ... Hello ... my old friends ... It's great to see you once again! Yours Truly KJS recently had the great pleasure of interviewing Dave Collison, co-founder of The Trembling Wilburys for ELO Beatles Forever (ELOBF) who are - as far as we are aware at the time of writing, the only Traveling Wilburys tribute band in the UK - and possibly the world!

KJS: My first question has to be who chose the band name?
DC: Everyone except me! I've wanted to put a Wilburys or Roy Orbison tribute band together for years and wanted them to be called the Flying Mulberries. Fortunately, and pretty much unanimously, the rest of the band preferred The Trembling Wilburys. It was only afterwards that I found out Trembling Wilburys was what George Harrison originally wanted to call the Traveling Wilburys.
KJS: Obviously, my initial interest in the Wilburys was based around the involvement of Jeff Lynne, but I soon came to rediscover the legend that is Roy Orbison too. What was it about The Traveling Wilburys that inspired the formation the band? How and when did you guys meet up?
DC: Pure luck and fantastic timing! Most of the band already existed in the form of The Dave Stark Five featuring everyone apart from myself and Glen Knowler, who plays the part of George. In October and November three years ago (2009), I went to The Castle Rocks [a great music venue in North London] for what I thought was an open mic night. When I arrived, I was told by the owner, Denis Cook, that there was no 'open mic' that week and he introduced me to David Stark who had just finished a Sunday night jam there. He told David that I did Roy Orbison songs and David pulled a Roy Orbison baseball cap from his bag, informing me that he was a member of the fan club and a personal friend of Barbara Orbison, Roy's Widow. David also met Glen Knowler at around the same time. We started to perform together at The Castle and it grew from there.
KJS: Which Wilbury is your personal favourite and why?
DC: It's hard to pick a favourite. Each member seems to be so pivotal to the band. My fave artist away from the Wilburys is Roy. I just love his incredible song writing and his amazing vocals. However, each and every Wilbury, to my mind, is an exceptional artist in his own right.
KJS: Please tell me about the band members, their roles and personalities?
DC: Well, first we have our drummer, David Stark. He's pretty much the most important part of the band [in my opinion] in that he got the band together, he knows everyone and he keeps it all organised. He's very laid back, always busy and has been photographed which pretty much anyone you care to mention. Then we have Dzal Martin, an incredible lead guitarist. Guitar playing and guitars in general are his life. I like to call him George Harrison's hands but, really, he is just a great musician. I have no idea how he's not as famous a Gary Moore, Mark Knopfler and the like. Andy McNish is our rhythm guitarist and Tom Petty/Bob Dylan vocal part. His playing and singing are kind of like the glue that brings the rest of the parts together and he likes to make sure everyone else is getting their part spot on. Marko Laver is our bass player and Jeff Lynne on the vocals. He's also a big Roy fan, like myself. This man knows his stuff. 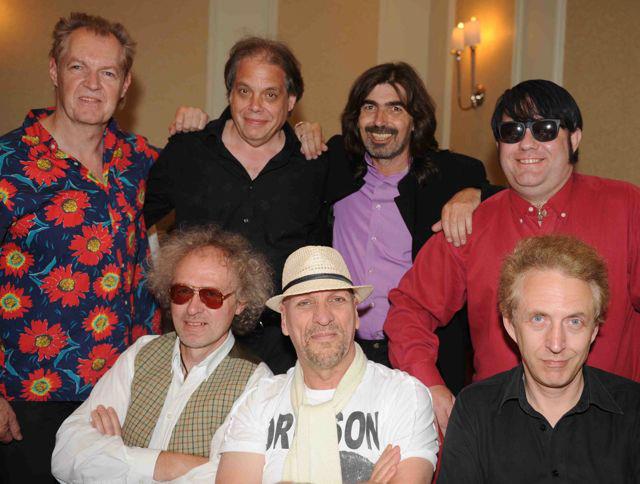 Howard Robin, who sadly is hardly ever seen, is our keyboard player. We wanted to call him 'Liberace' Wilbury but he much prefers being known as: 'Fingers'. He has every part of every song meticulously noted down to prevent any arguments when we rehearse. Then there's our Glen. Glen Knowler is probably the most authentic looking George-a-like in the world, second only to Dhani Harrison (George's son). And, as a bonus, his voice is very similar to George's too. He's always up for a laugh with that proper British Comedy type humour. Finally, there's myself, as Roy Orbison. And I'm just great! Say no more! As for personalities, just the nicest bunch of people ever. A total pleasure to be involved with.
KJS: What has the reaction and interest been like to your act?
DC: The reaction has been amazing right from the start. Everyone who has been to our gigs has been shocked by the likeness Glen has to George, the sound of my own voice in comparison to Roy's (which is a huge compliment) and the overall chemistry of the band. Every moment has been enjoyable. We've had interest from venues across the seas and up and down the country. It would seem that what we have in The Trembling Wilburys is quite unique.
KJS: Are The Trembling Wilburys a live gigging band? If so, what plans do you have for touring in the future?
DC: We are a live gigging band and our plans are pretty simple. We want to get more gigs in more venues in whatever places we're welcome. We're definitely going to be gigging more in 2013 and spreading our wings, so watch this space!
KJS: I’ve seen some footage of the band over on YouTube, but have you recorded any of your material, Dave, what can you tell us about your future plans?
DC: We have recorded a few songs which are in the final mixing stage of production and we hope to record a lot more, including some original tracks. Anything that we do get done will be available at gigs and on the web site but, for the moment, I'm unable to divulge exactly what that will be.
KJS: Will you be travelling up to the Midlands or Merseyside any time soon so that the main ELO and Beatles fan bases can see and hear you play themselves?
DC: We plan on getting to The Beatles festival this year in Liverpool and anywhere else we're welcome so, yes, Midlands and Merseyside are distinct possibilities. We're just slightly worried that when we go to Liverpool, someone will try to kidnap Glen!
KJS: How can folks find out what The Trembling Wilburys are up to and where they are performing live?
DC: You can visit our web site at tremblingwilburys.co.uk, or like our Facebook page at www.facebook.com/TremblingWilburys to be kept informed of everything we're getting up to. I run the website and three of us keep the Facebook page up to date so there's little danger of anything being missed. Also, people can contact the band directly from the web site's Contact page and they can subscribe to our newsletter too.
KJS: Now finally, here is the question that I always ask next when interviewing for ELOBF: What are your personal fave tracks by The Traveling Wilburys, ELO, The Beatles - and why?
DC: My personal fave Wilburys track, at the moment, is "Last Night". Something about that song always lifts my mood and has me bouncing along to the music. ELO? So many to choose from but I'm afraid I'll have to plump for "Mr. Blue Sky" for the same reason a: "Last Night". You can't help but smile where that tune is concerned! And, last but not least, The Beatles. Gosh, that's a tough one. I honestly can't pick a fave but I'm a big fan of their earlier stuff. I do particularly like "Drive My Car". Proper optimism and ambition!

Yours Truly KJS would like to thank Dave Collison for his taking part in this entertaining and informative interview. ELO Beatles Forever (ELOBF) recommends The Trembling Wilburys to those enlightened folks who enjoy the music of ELO/Jeff Lynne, The Traveling Wilburys, The Move, Roy Wood, The Idle Race, 'Brum Beat', The Beatles and related artistes. Go see 'em!
Until next "Time" in the ELO (and related) Universe ... KJS ... 31-Oct-2012
Posted by Keith J Sinclair at 22:30