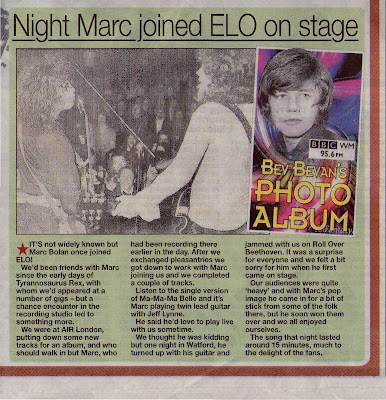 #403: Hello... Hello ... my old friends ... It's great to see you once again! September 16th is not only a significant date for me on a personal level, this year it marks the 35th anniversary of another of my musical heroes: Marc Bolan. I am very grateful that my friend Pete Hackett from Cult of Wedge alerted me to a nice article in the latest edition of The Sunday Mercury. In the above article, Bev Bevan writes fondly about that legendary coming together of ELO and Marc Bolan both at Air Studios and later on stage at Watford Town Hall @ Tuesday 10th April 1973 thus: 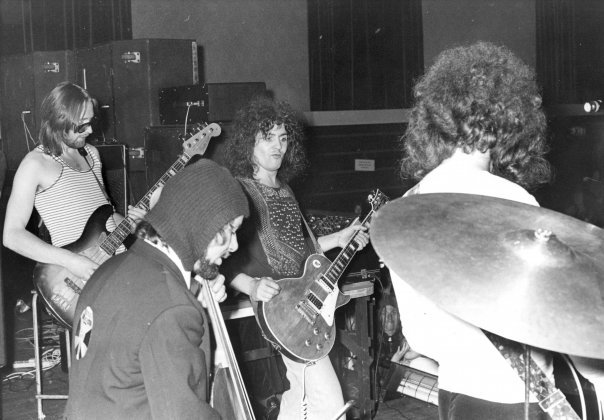 "It's not widely known but Marc Bolan once joined ELO! We'd been friends with Marc since the early days of Tyrannosaurus Rex, with whom we'd appeared at a number of gigs - but a chance encounter in the recording studio led to something more. We were at AIR (Studios) London, putting down some new tracks for an album ("On The Third Day"), and who should walk in but Marc, who had been recording there earlier in the day. After we exchanged pleasantries we got down to work with Marc joining us and we completed a couple of tracks. Listen to the single version of "Ma Ma Ma Belle" and it's Marc playing twin lead guitar with Jeff Lynne. We thought he was kidding but one night in Watford, he turned up with his guitar and jammed with us on "Roll Over Beethoven". It was surprise for everyone and we felt a bit sorry for him when he first came on stage. Our audiences were quite 'heavy' and with Marc's pop image he came in for a bit of stick from some of the folk there, but he soon won them over and we all enjoyed ourselves. The song that night lasted around 15 minutes, much to the delight of the fans!"

Yours Truly KJS also posted this article back in 2010 on the 33rd anniversary of the death of Marc, noting also that he featured on more than one song recorded during the OTTD sessions:

It was ironic that Marc died in the year that ELO had begun to reach the same levels of success with "Out Of The Blue" that he achieved in those early seventies years when ELO were largely unknown and Marc was (and still is) an iconic Superstar.