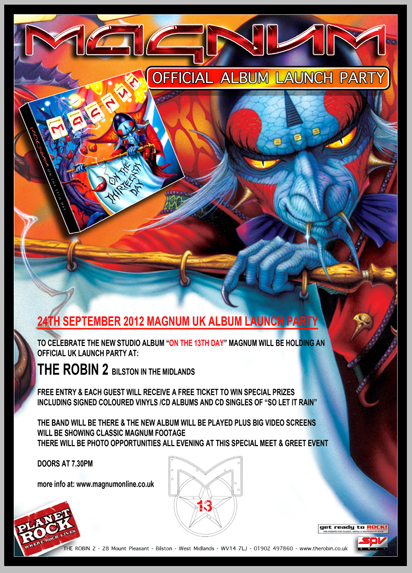 #393: Hello ... Hello ... my old friends ... It's great to see you once again! Former Jet Records label mates of ELO and legendary British rockers Magnum release their new album on Monday 24th September entitled "On The Thirteenth Day" via Steamhammer/SPV Records. And Magnum are celebrating the release of this, their eighteenth (18th) album, at ELOBF recommended venue The Robin 2 by hosting their official launch party thus:

"TO CELEBRATE THEIR NEW STUDIO ALBUM “ON THE 13TH DAY”, MAGNUM WILL BE HOLDING AN OFFICIAL UK LAUNCH PARTY AT THE ROBIN 2, BILSTON IN THE MIDLANDS. ENTRY IS FREE AND EACH GUEST WILL ALSO RECEIVE A FREE TICKET TO WIN SPECIAL PRIZES INCLUDING SIGNED COLOURED VINYLS AND CD ALBUMS PLUS COPIES OF THEIR NEW SINGLE “SO LET IT RAIN”. THE BAND WILL BE THERE, THEIR NEW ALBUM WILL BE PLAYED PLUS LARGE VIDEO SCREENS WILL SHOW CLASSIC MAGNUM FOOTAGE ALL EVENING. THERE WILL BE PHOTO OPPORTUNITIES ALL EVENING AT THIS SPECIAL MEET AND GREET EVENT"

The band have also announced details for their forthcoming European and British tour. With an album title reminiscent of ELO's "On The Third Day" released on ELO Part II's former label, the musical connections don't end there because the support act for their UK tour will be: Trillium - who just happen to be label mates with Jeff Lynne over on Frontiers Records! In the meantime, why not revisit my interesting interview with long time Magnum keyboard maestro Mark Stanway for ELOBF back in January 2011 here: