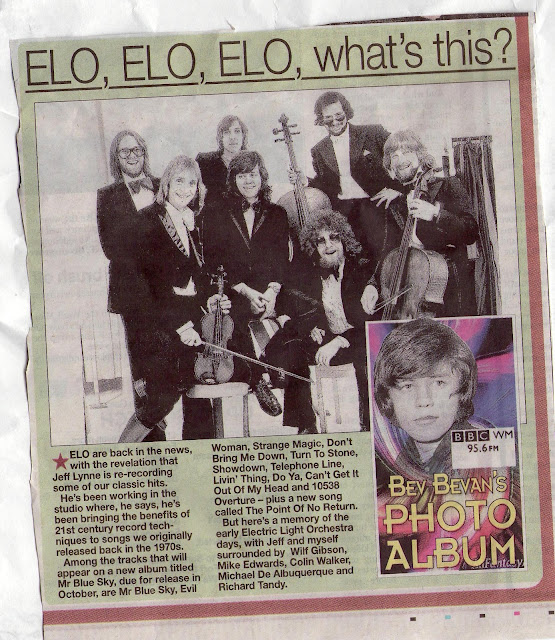 #385: Hello... Hello ... my old friends ... It's great to see you once again! When ELO Beatles Forever (ELOBF) roving reporter Pete Reynolds is not checking out ELO (and related) stories for Yours Truly KJS down in South Devon - such as the continuing court case regarding the death of Mike Edwards - he sends me newspaper cuttings (such as the one above) from the latest edition of the Sunday Mercury. In the above article, Bev Bevan writes candidly about the forthcoming Jeff Lynne album of ELO re-recordings: "Mr. Blue Sky" thus:

"ELO are back in the news, with the revelation that Jeff Lynne is re-recording some of our classic hits. He's been working in the studio where, he says, he's been bringing the benefits of 21st century record techniques to songs we originally released in the 1970's. Among the tracks that will appear on a new album titled Mr. Blue Sky, due for release in October, are Mr. Blue Sky, Evil Woman, Strange Magic, Don't Bring Me Down, Turn To Stone, Showdown, Telephone Line, Livin' Thing, Do Ya, Can't Get It Out Of My Head and 10538 Overture - plus a new song called The Point Of No Return. But here's a memory of the early Electric Light Orchestra days, with Jeff and myself surrounded by Wilf Gibson, Mike Edwards, Colin Walker, Michael de Albuquerque and Richard Tandy."