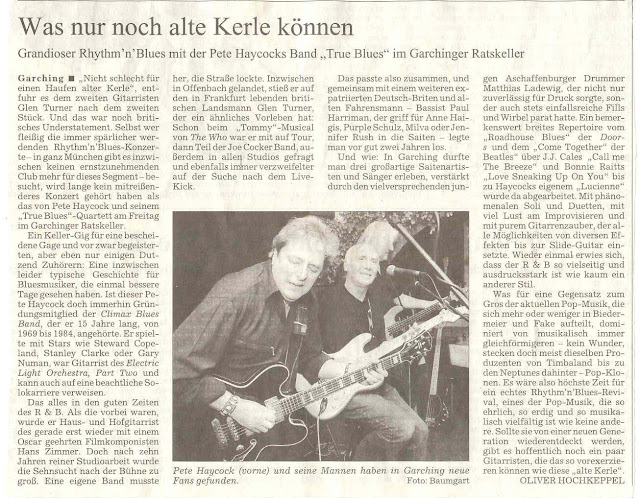 #373: Hello ... Hello ... my old friends ... It's great to see you once again! It is indeed good to see that former Climax Blues Band and ELO Part II founder Pete Haycock is still plying his superb [slide] guitar trade over in Germany and in LA. With many thanx to Deb Chabotte of the Pete Haycock Appreciation Society for making me aware of this excellent newspaper gig review from Germany by Oliver Hochkeppel - which I have very loosely translated and paraphrased thus:

"Not bad for a bunch of old guys!" stated guitarist Glen Turner after the second piece. And that was a British understatement! Even for those who attend these increasingly sparse Rhythm 'n' Blues gigs - and there are now no serious clubs in Munich for this genre - it will be a long time before they hear such an impressive concert than that of Pete Haycock and his True Blues quartet on Friday at Garching Ratskeller. A cellar gig for a modest fee and a few dozen enthusiastic listeners: A now sadly typical story for blues musicians who have seen better days. This is Pete Haycock, founding member of the Climax Blues Band with whom he was with for 15 years from 1969 to 1984. He has played with the likes of Stewart Copeland, Stanley Clarke and Gary Numan, was a guitarist with the Electric Light Orchestra Part Two, and he can also point to a remarkable solo career.
All this was in the good old days of R 'n' B ... But after ten years of studio work including his collaboration with Oscar winning film soundtrack composer Hans Zimmer, the lure of the live stage was too big. A band was needed, the road beckoned. Meanwhile in Offenbach, he poked at the Frankfurt-based British compatriot Glen Turner, who had a similar career. Even though he was on tour with: "Tommy" - a musical by The Who - and then with the Joe Cocker Band, and then in many studios, he was in desperate need of the kick of live music. This fitted together with another German-British ex-pat - Bass player Paul Harriman - who played with Anne Haigis, Purple Schultz, Milva and Jennifer Rush. And here in Garching, you could experience three great musicians/singers amplified by the promising young Aschaffenburg drummer Matthias Ladewig ... always readily imaginative and providing the backbone of the band. A remarkably wide repertoire from: "Roadhouse Blues" (The Doors) to "Come Together" (The Beatles) to "Call Me The Breeze" (J J Cale) to "Love Sneakin' Up On You" (Bonnie Raitt) to Haycock's own "Lucienne" were performed. The set began with phenomenal solos and duets, with superb improvising with the pure guitar magic of the slide guitar. Once again, it was proof that R & B is so versatile and much more expressive than any other style.
What a contrast to the majority of today's pop music, which is .. dominated by ... mostly the same producers such as Timbaland and The Neptunes - pop clones. It is therefore high time for a real Rhythm 'n' Blues revival ... so earthy and so musically diverse as any other. If (R 'n' B) were rediscovered by a new generation, there are hopefully a few guitarists who can follow on from these "old guys"!
Wouldn't it be great if Pete could bring his True Blues over to the UK? A gig at The Robin 2 would be fantastic! ELO Beatles Forever (ELOBF) recommends Pete Haycock and his True Blues project to those enlightened folks who also like ELO/Jeff Lynne, Roy Wood, 'Brum Beat', The Idle Race, The Move, The Beatles and related artistes.
Until next "Time" in the ELO (and related) Universe ... KJS ... 28-July-2012
Posted by Keith J Sinclair at 21:30