Return to Vinyl: A New World Record & Out Of The Blue 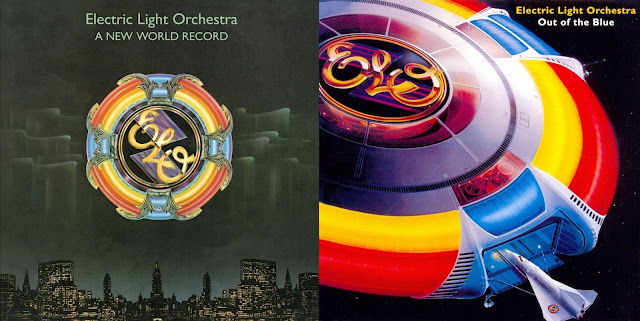 #362: Hello ... Hello ... my old friends ... It's great to see you once again! You may or may not recall that back in January, KJS/ELOBF posted this article regarding the impending release on 180g vinyl of the Electric Light Orchestra's superb 1974 symphonic masterpiece "Eldorado":

Yours Truly KJS is now pleased to announce that the superb Music On Vinyl label will also be releasing ELO's groundbreaking Seventies epics (literally) "A New World Record" (1976) and "Out Of The Blue" (1977) on 180g vinyl this Summer (source: my good friend Jerry Palovick @ A Jeff Lynne And Related Blog). Both releases are presently available for pre-order thus:

ANWR is released on Monday 2nd July whilst being advertised as 180 gram audiophile vinyl with insert and embossed sleeve. OOTB is due for release on Monday 6th August and is advertized as 180g 2LP audiophile vinyl in gatefold sleeve with inserts. Music On Vinyl have confirmed that OOTB will be in matching, classic transparent Blue vinyl - but only for the first 1,000 numbered copies!

Both releases are a tempting yet worthwhile purchase for the record buying ELO connoisseur - even if you don't currently possess a turntable!
Until next "Time" in the ELO (and related) Universe ... KJS ... 25-June-2012
Posted by Keith J Sinclair at 20:15