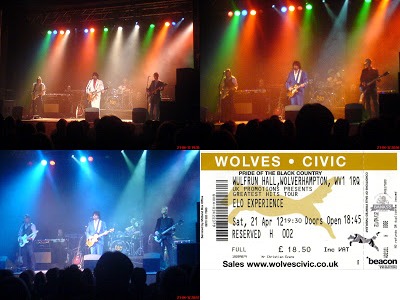 #331: Hello ... Hello ... my old friends ... It's great to see you once again! Last night (Saturday 21st April) saw the belated debut of the aptly named The ELO Experience, more than ably led by Andy Louis, at Wolverhampton's Wulfrun Hall - and the excited audience anticipation of the gig was more than suitably satisfied with yet another polished and professional performance that showcased the ELO career of Jeff Lynne from 1972's "Roll Over Beethoven" all the way through to 1983's "Rock 'n' Roll Is King" to 2007's "Latitude 88 North".

Once again the band superbly performed the first half of "Concerto For A Rainy Day" with "Standin' In The Rain" and "Big Wheels" in true "Out Of The Blue" style. From the opening notes of "All Over The World" through to the rousing encore of "Mr. Blue Sky", the band had the appreciative and responsive onlookers rocking and reeling to every song. Yours Truly KJS will say it yet again: This band lacks only an eclectic violinist!
Feel free to explore my previous reviews for the The ELO Experience within ELO Beatles Forever (ELOBF). Check out their official website &/or tour dates via this link thus:

ELO Beatles Forever (ELOBF) recommends The ELO Experience to those enlightened folks who enjoy the music of ELO/Jeff Lynne, Roy Wood, The Move, 'Brum Beat', The Beatles and related artistes.