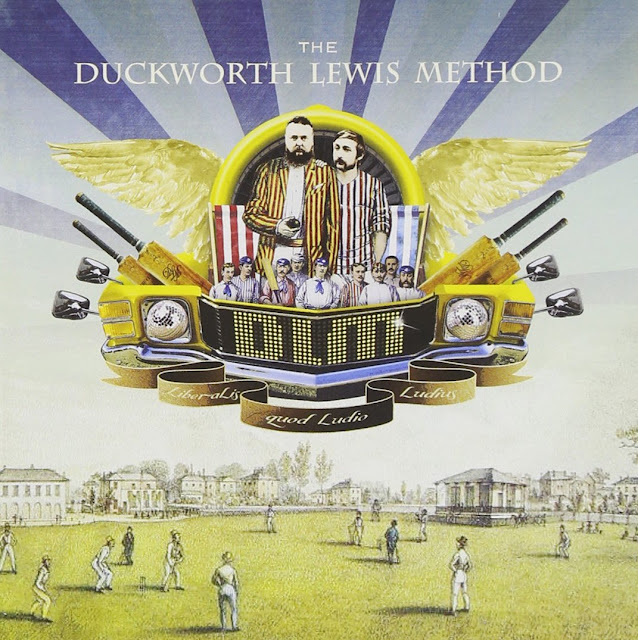 #306: Hello ... Hello ... my old friends ... It's great to see you once again! Ever meant to buy an album but didn't at the time and when you finally did you asked yourself that immortal question: "Why did I wait so long?" Well folks, that is how it is with this very belated ELOBF article regarding this great cricket themed album from 2009, the eponymously entitled The Duckworth Lewis Method (DLM) who are Thomas Walsh (of Pugwash fame) and Neil Hannon (from The Divine Comedy).

I still recall DLM doing an interview on BBC Breakfast News back in 2009 promoting the album and must admit that they caught my attention back then. Hence, Yours Truly KJS decided, after my recent review of "The Olympus Sound" by Pugwash and the soon-to-be-published interview with Thomas for ELO Beatles Forever (ELOBF), to buy this fascinating album plus a couple of tickets for the Pugwash gig at The Borderline in London on Saturday 31st March.

This twelve track homage to the game of cricket by two great musicians wholly influenced by the music of Jeff Lynne and ELO was literally pipped to the Ivor Novello Award in 2010 by Paolo Nutini and is more than worthy of any music industry recognition.

With the ELO influence apparent throughout, most notably with "Mason On The Boundary", "Meeting Mr. Miandad" and "The Nightwatchman", one can hear sweet music within this record reminiscent of The Beatles and The Byrds amongst not a few others. The whole CD could be termed a concept album - replete with a DLM flavoured Epilogue and Prologue - but it is more than that on many levels. The love of the game of the cricket espoused by Thomas and Neil is intermingled with catchy, foot-tapping musical constructions that are an aural delight. The good news is that you can still purchase "The Duckworth Lewis Method" from amazon.co.uk thus:

ELO Beatles Forever (ELOBF) recommends The Duckworth Lewis Method to those enlightened folks who enjoy the music of ELO/Jeff Lynne, Roy Wood, The Move, Brum Beat', The Beatles and related artistes.
Until next "Time" in the ELO (and related) Universe ... KJS ... 11-Feb-2012
Posted by Keith J Sinclair at 22:30